History has provided a plethora of objects that just seem to radiate bad luck. Depending on your beliefs, the following examples will either seem like amazing coincidences or the signs of something evil and invisible lurking nearby. Faced with the bizarre luck surrounding each object, the past owners always became eager to pass on each item, and many of these objects have found their way into various museums, where they reside with warnings signs placed before them. These objects may inspire a subtle, creepy fear in some people, or mocking laughter in more realistic people, but we can say one thing is certain: it is better to avoid these objects, rather than tempt the wrath of things we cannot see. 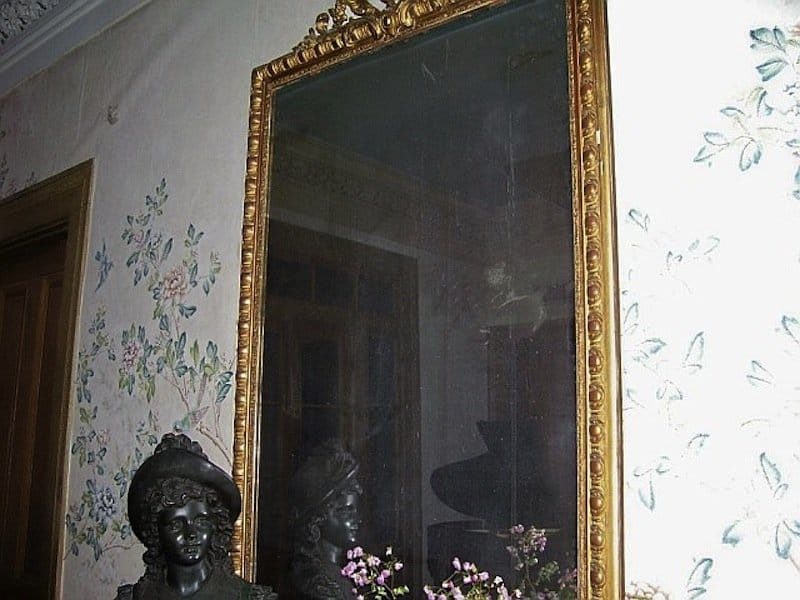 Myrtle mansion is already notorious for being haunted. A mirror in its first-floor hallway is believed to contain the spirits of Sarah Woodruff and her children, who were all poisoned and killed on the estate. Present-day guests to the mansion still claim to see handprints on the mirror, along with dark figures moving about. 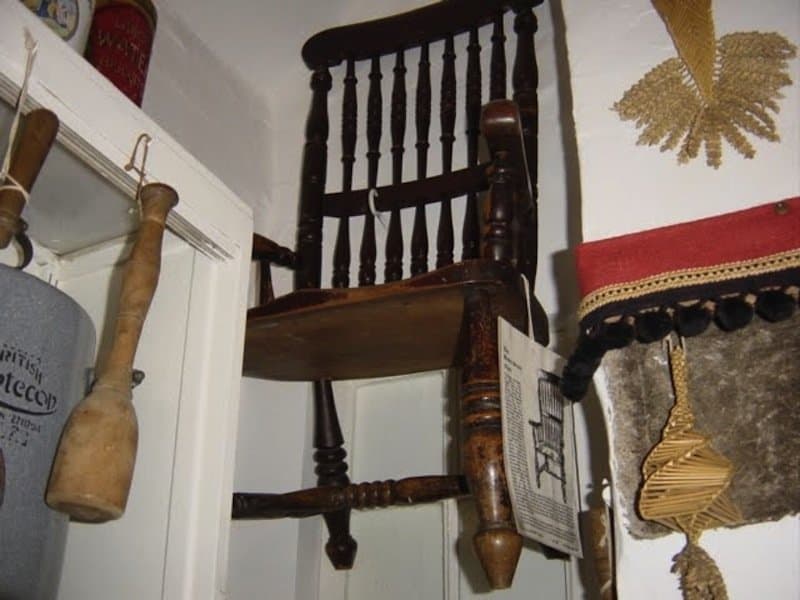 Convicted murderer Thomas Busby was sentenced to death in the early 1700’s. He requested a final meal at his favorite local pub. Upon finishing his meal, Busby stood up and exclaimed, “May sudden death come to those who dare sit in my chair!” Supposedly some 63 people have died after sitting in the chair, some only moments after getting up. The pub owner in 1972 finally realized the death toll was getting too creepy, so he donated the chair to a museum. 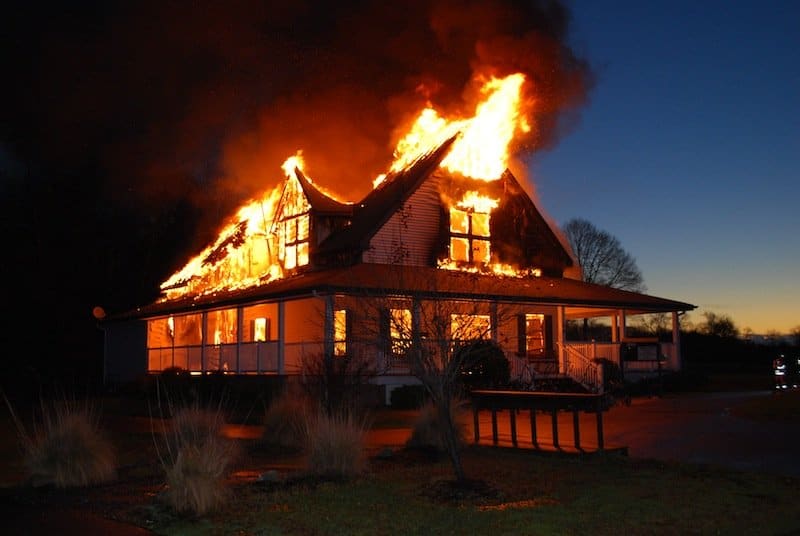 Painted in 1950’s, the Crying Boy immediately became a bestseller. Many copies of the painting found their way into British homes. The odd thing was that many of these homes then caught on fire and burned away, but the copies of the paintings in each home were always left untouched by the fires. 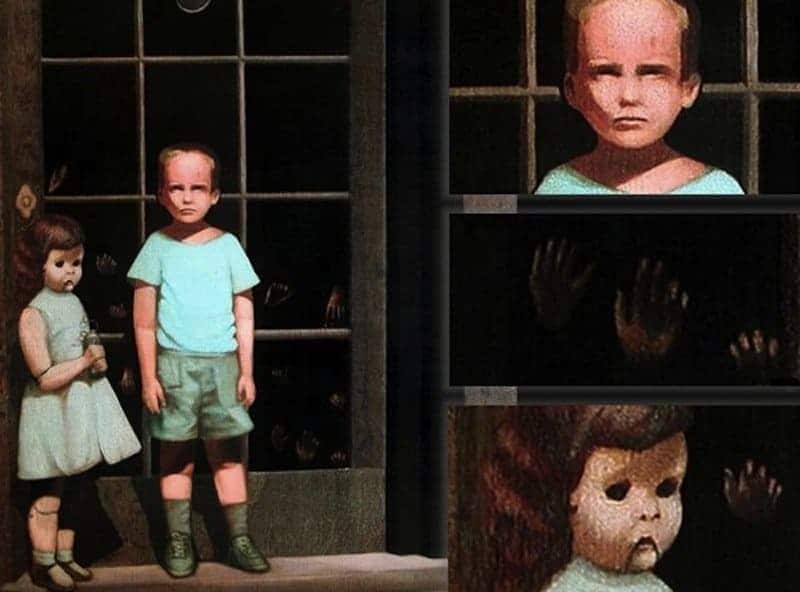 This painting by Bill Stoneham doesn’t stay in an owner’s hands too long. Multiple owners have claimed the characters move at night or disappear altogether, and many people who have viewed it report that they immediately feel sick or nauseated. What’s more, the owner of the first gallery to showcase the painting died within a year, as well as the first critic to write about it. 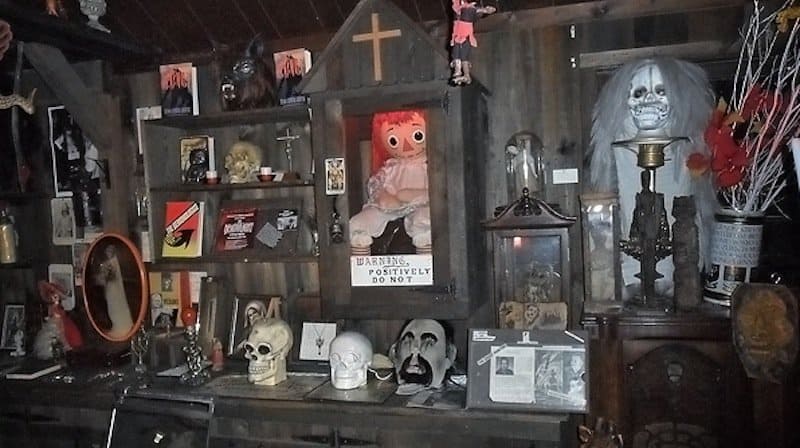 A lady found this doll in the 1970’s in an antique shop, and she bought it for her daughter. Soon the mother and daughter started to find the doll in other rooms besides those it was originally placed in. Also, droplets of blood were often found around the doll, along with strange notes. Donated to the Warrens Occult Museum, this doll sits in a glass case and has a warning sign before it. 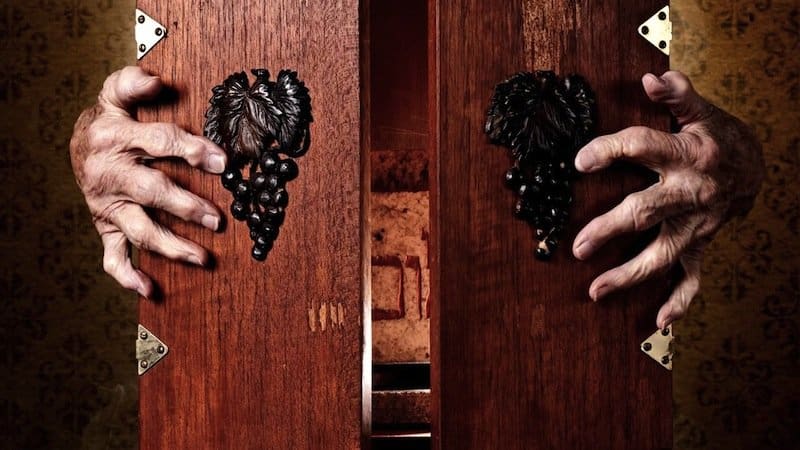 In 2001, Kevin Mannis bought what he thought was an antique wine cabinet at an estate sale. Soon he began to suffer from nightmares along with people around him. So, the best thing he thought to do was give the wine cabinet to his mother – who suffered a stroke and died the same day. Subsequent owners reported horrible events, and the latest owner, Jason Haxon, developed a rare skin disease. 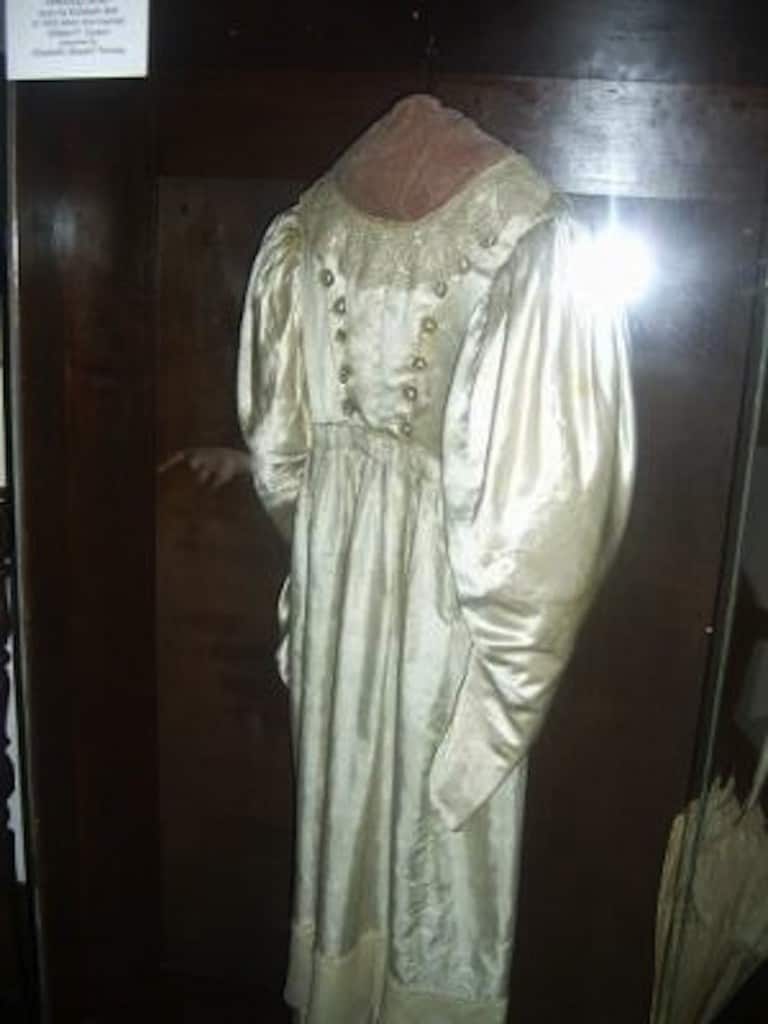 In the mid-1800’s, Anna Baker (who came from a wealthy family) fell in love with a common ironworker. The two planned a wedding, and she bought a dress. Baker’s father, however, found out and forbade the marriage. Anna Baker sulked for the rest of her life until she died in 1914. The wedding dress is on display in the Baker mansion to this day, and it is often seen to be moving, even though it is in a glass case. 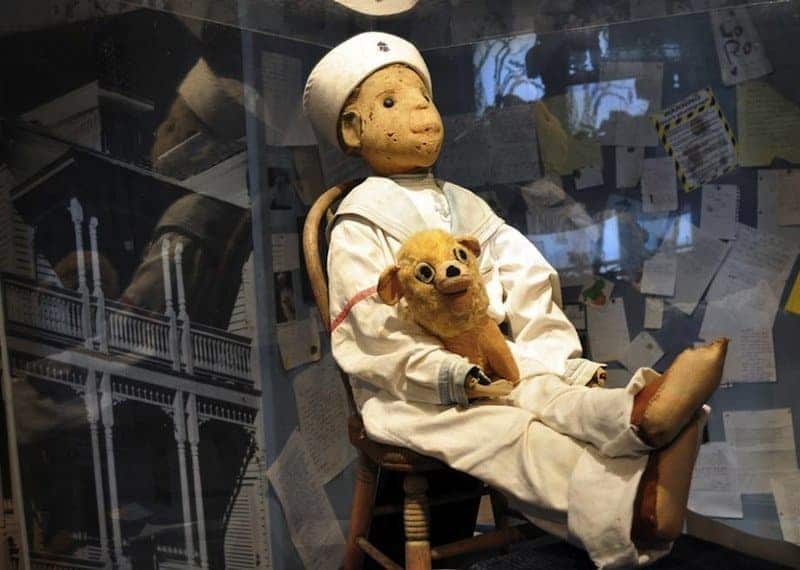 Robert Eugene Otto was given a particular doll when he was 4-years-old. The doll is crudely human, wears a sailor outfit and even has its own lion doll. As the legend goes, Otto’s parents would often hear him giggling with another person who had a deep, gruff voice. They sometimes found the doll alone in rooms with overturned furniture.

The doll currently resides in Key West’s Fort East Martello Museum, and it supposedly curses whoever takes photos of it. 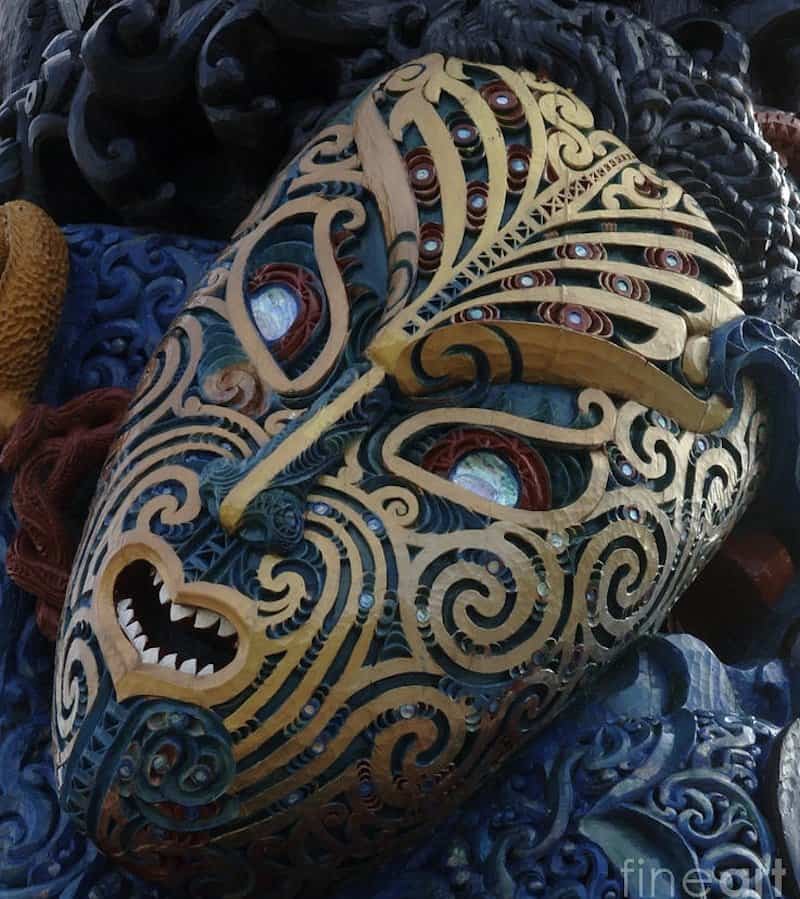 The old Maori warriors of New Zealand once believed that when their warriors died, their souls would be left behind in their warrior masks. A few examples of these masks are still on display in New Zealand museums, but the displays have warning signs posted before them. Pregnant women, it seems, often suffer complications after coming within the presence of the Maori-warrior masks. 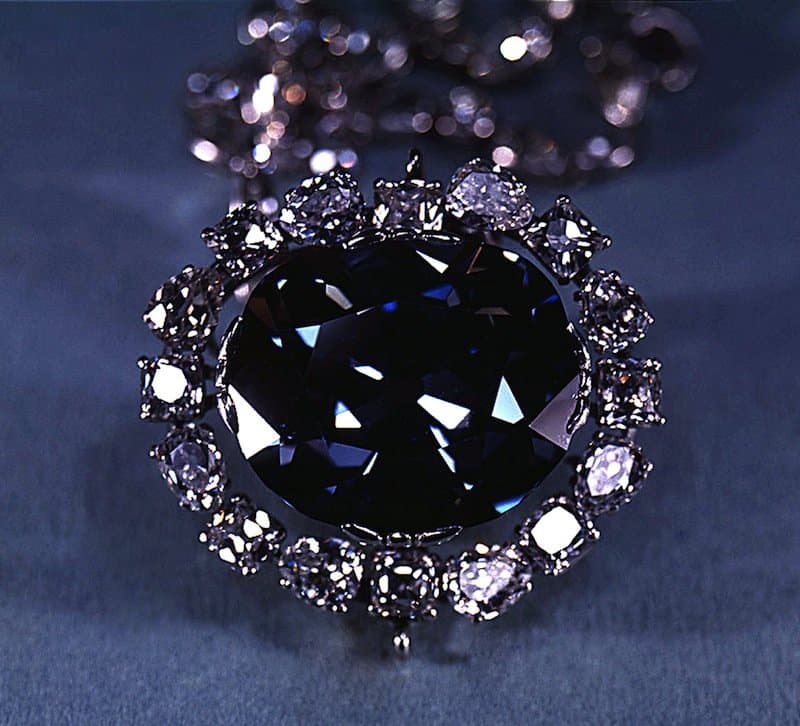 Probably the most cursed diamond of all time. The Hope Diamond is 45.5 carats and about one billion years old. Since its discovery, its innumerable owners have met ill luck, having suffered things such as divorce, disgrace, imprisonment, torture, financial ruin, suicide, etc. The Hope Diamond seems to dabble in everything and likes to provide variety in its curses. It currently resides in the Smithsonian Natural History Museum.