Tis the season to be jolly (tra lalalala lala la la). Christmas is getting ever closer, and most of us are embracing the holiday spirit, drinking coco, wearing gaudy sweaters, and wrapping up presents. There are of course, some of us who maybe take things a little too far, and force our animals to join in one all the festive fun by dressing them up in a number of strange outfits, or getting them in on the Christmas fun in other ways. Still, no matter what you think of it, it’s undeniably adorable. Take a look at this cracking Christmas selection… 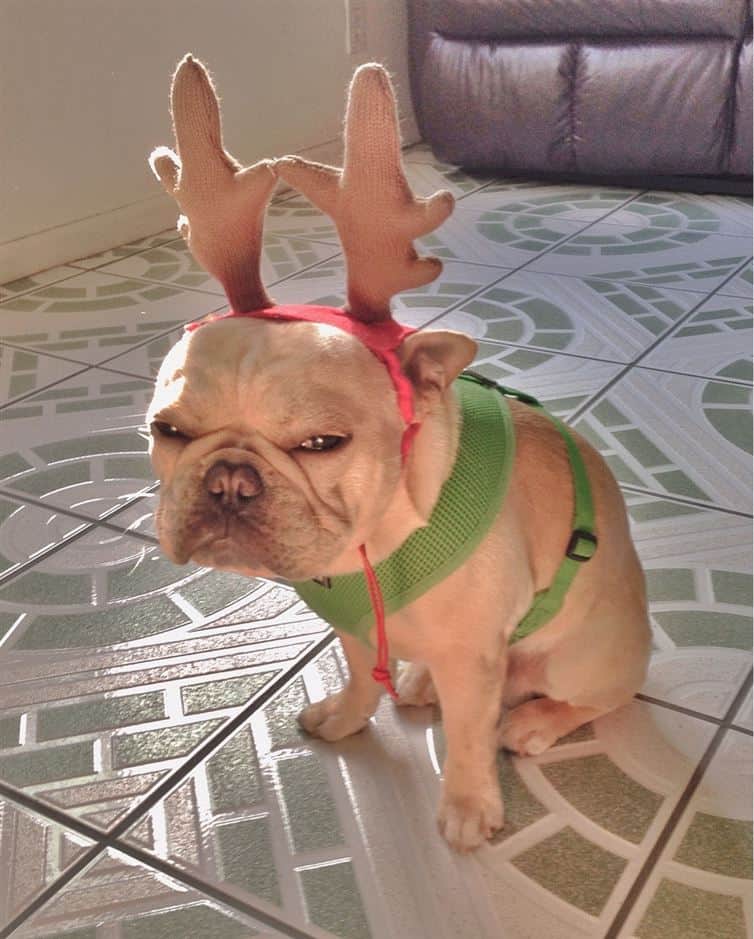 This poor, poor pooch is looking like he’ll never trust another living soul again. Just look at the hatred burning in those squinted eyes. Oh, the humanity of it all. We actually tried to dress up a dog we met on the street like Rudolph, but he bit us, and then his owner attacked us with her handbag. That’s what we get for trying to bring a little Christmas spirit into the world (that story was made up, don’t worry, we don’t actually condone attempting to dress up any animal without their consent). 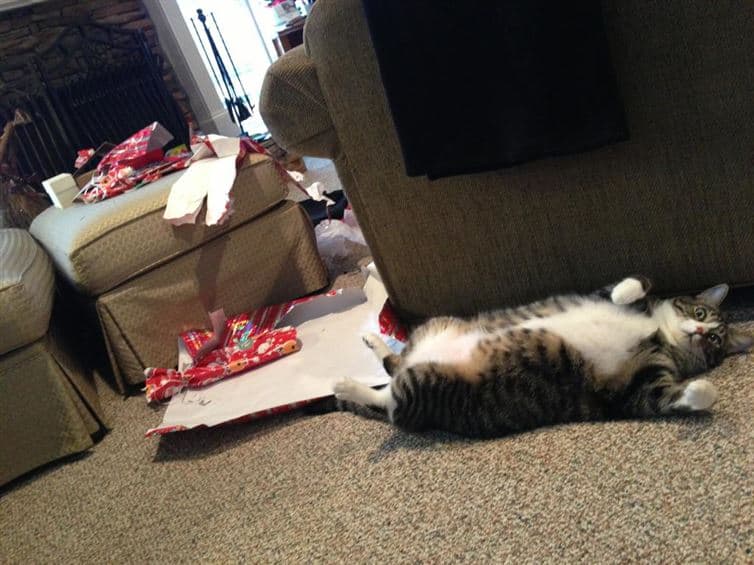 This fat cat couldn’t wait till Christmas to see what he’d gotten. And then he went and opened everyone else’s presents too. By the looks of it, he might well have eaten the contents of each and every present under the tree, regardless of whether it was food or not. Just look at the expression on that face. That is undoubtedly a cat who has been caught in the act and is ashamed at what he’s done. But then again, that’s the default expression for cats. 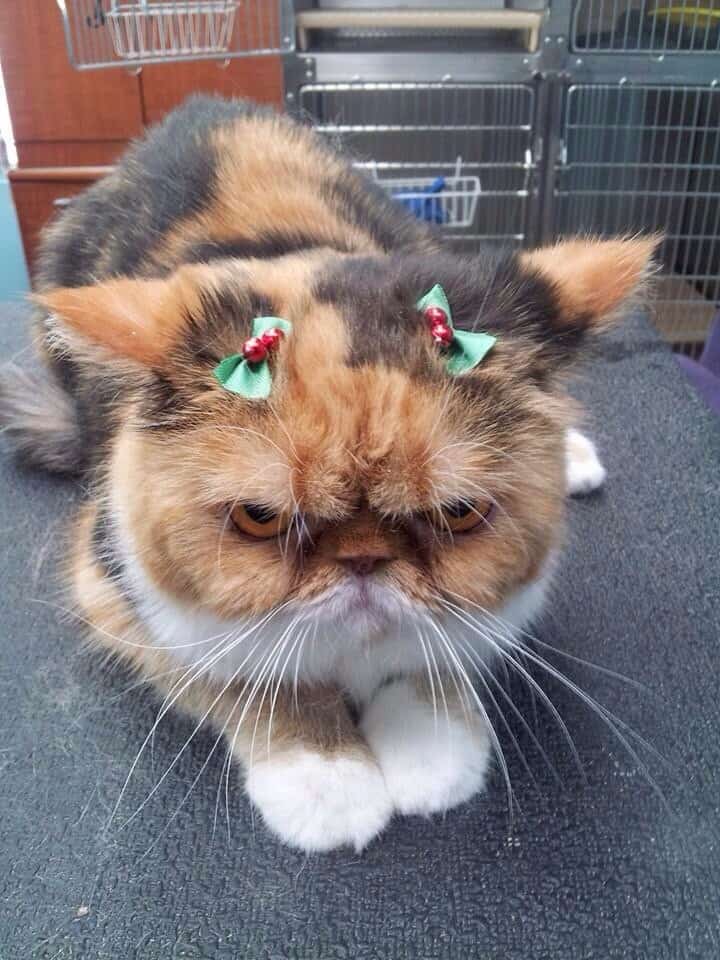 This feline is definitely not looking inclined to get into the festive swing of things. It looks like Grumpy Cat has a solid contender for simultaneously managing to be the scroogiest, yet cutest and fluffiest Christmas grump in the entire world. It’s a shame though, we think those little holly clips really bring out the beauty in those intensely terrifying eyes. It definitely adds something to that piercing gaze. 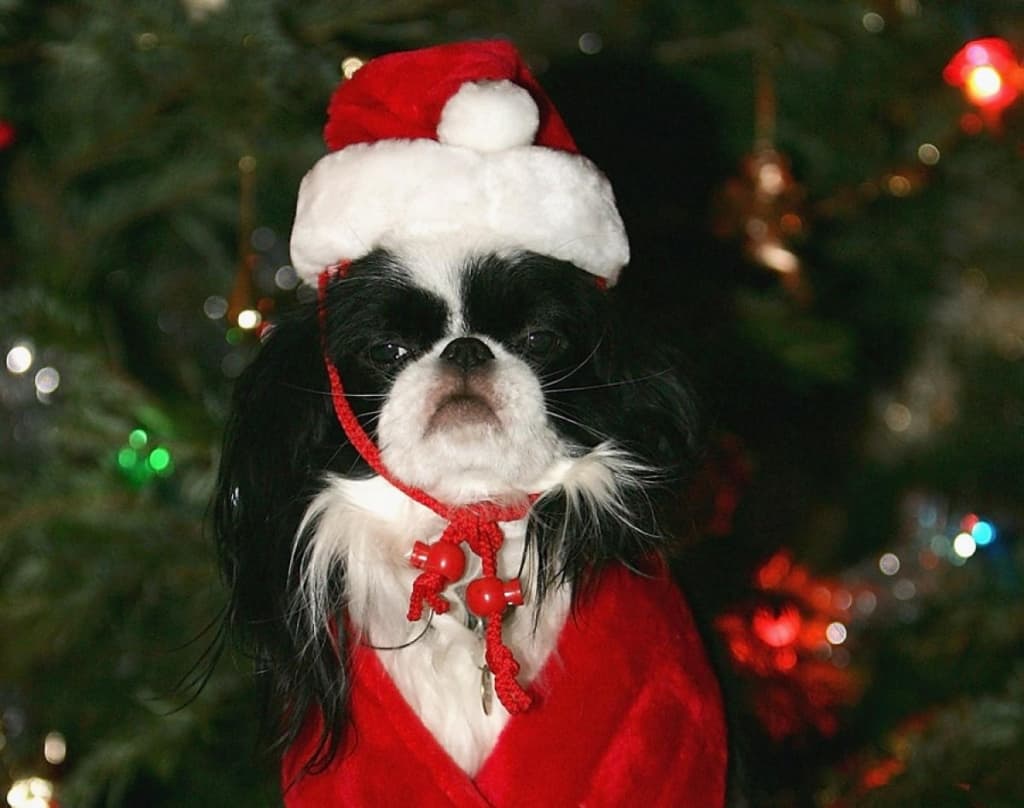 Seriously, why do none of these animals look happy to have been forced into their little Christmas outfits? This dog looks as if he’s just finished planning how to kill the family that placed him in this garish festive garb, and is currently considering how best to dispose of all of the bodies in one convenient and pain free go. We think he’ll go for a Breaking Bad style acid bath. Probably. Then again, probably not. 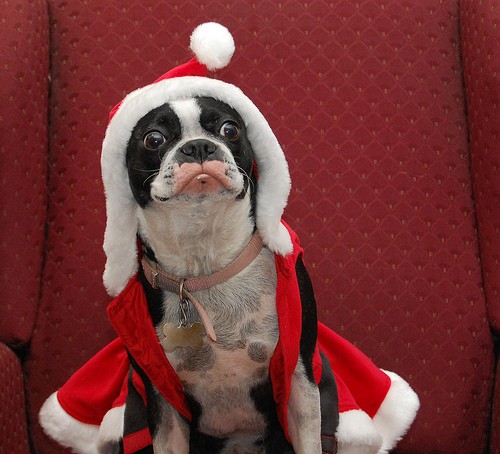 Ah, well this guy looks pretty happy. He knows what you want for Christmas, and he intends to deliver as best as he can. Can you imagine coming down in the middle of the night to try and sneak a glimpse at your Christmas presents, only to see this face hunched over the fire, helping himself to mince pies and mulled wine? Adorable. Actually, in the middle of the night a face like that might actually be genuinely terrifying. 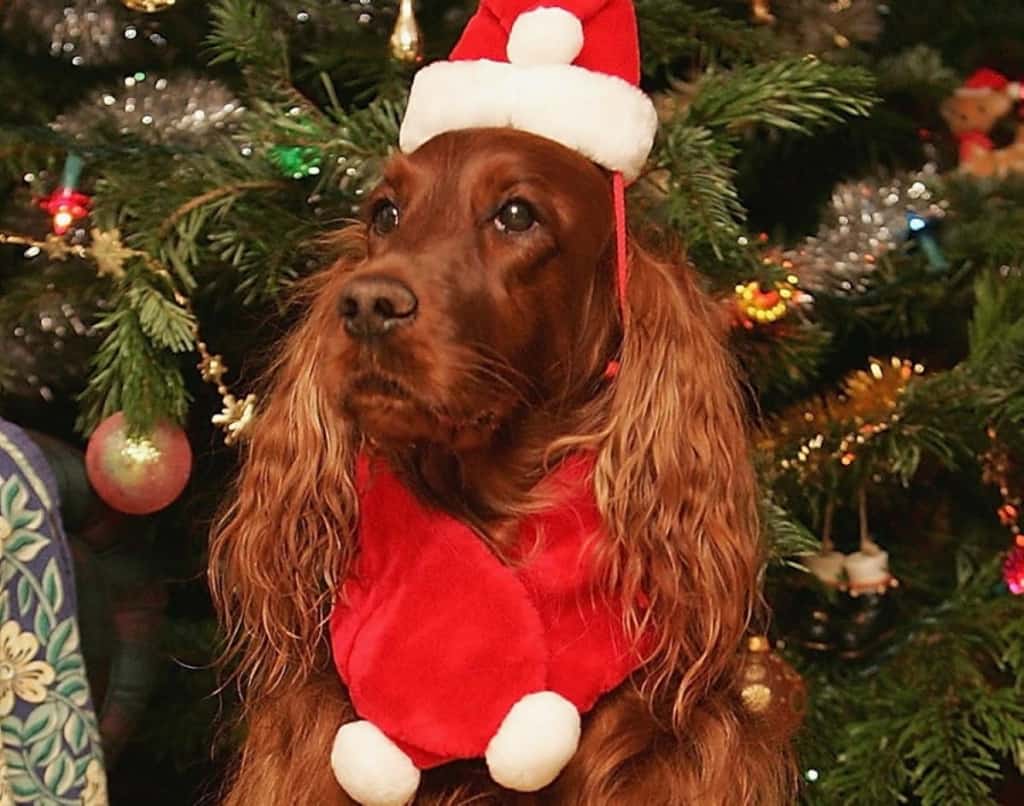 Obviously one of the most adorable things you could find under your Christmas tree. She looks so proud to be all dolled up in a festive fashion. And just look at those eyes! Most of the animals on this list have a look that could kill you dead, and then bring you back to life just to kill you all over again, but this little lady has nothing but unabashed love in her eyes. Awww, she’s made us feel all warm inside. 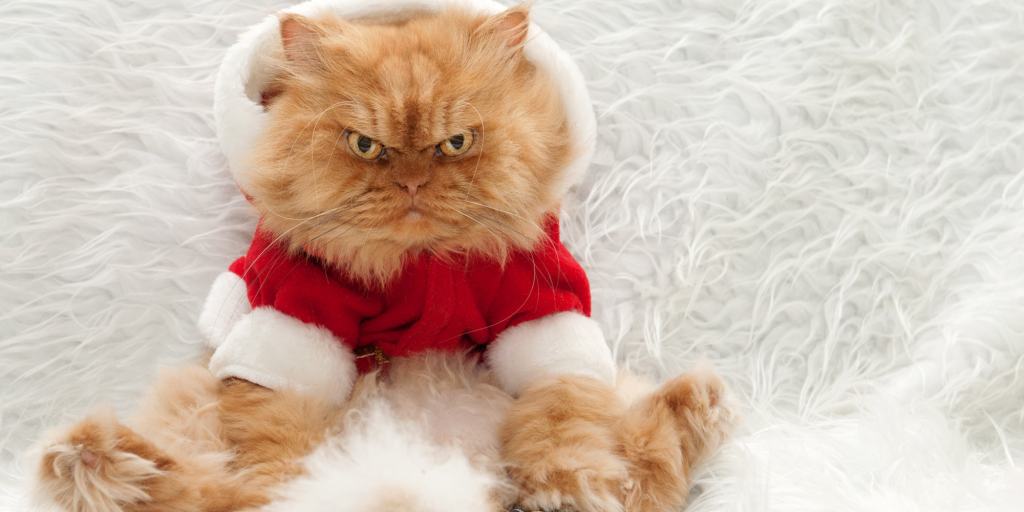 We’ve come to the conclusion that cats and Christmas just do not mix, at all. We’ve yet to find one cat on the internet that actually looks happy with their situation, and this one has just as much hatred in its face as the rest of the festive felines here. Maybe cats just aren’t happy when they’re doing things for other people and not for themselves. That seems about right, they are pretty self interested creatures at the best of times, and Christmas doesn’t really mesh with their whole selfish belief system. 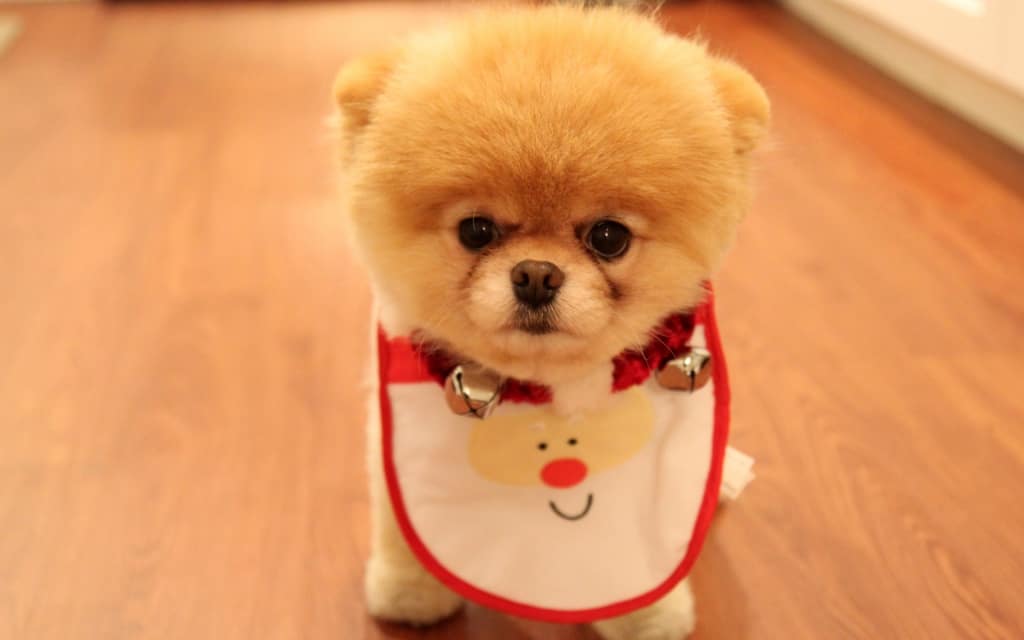 This adorable little fella has been waiting for his Christmas dinner for hours. Where is it? Who is gonna give it to him? Will you? Will he go hungry? Will he go without, this Christmas? Too many questions we don’t have the answers to, and it breaks our heart. He’ll probably be fine, of course, but look at that little face and tell us you don’t wanna take him in and give him everything he asks for. You don’t? Oh… 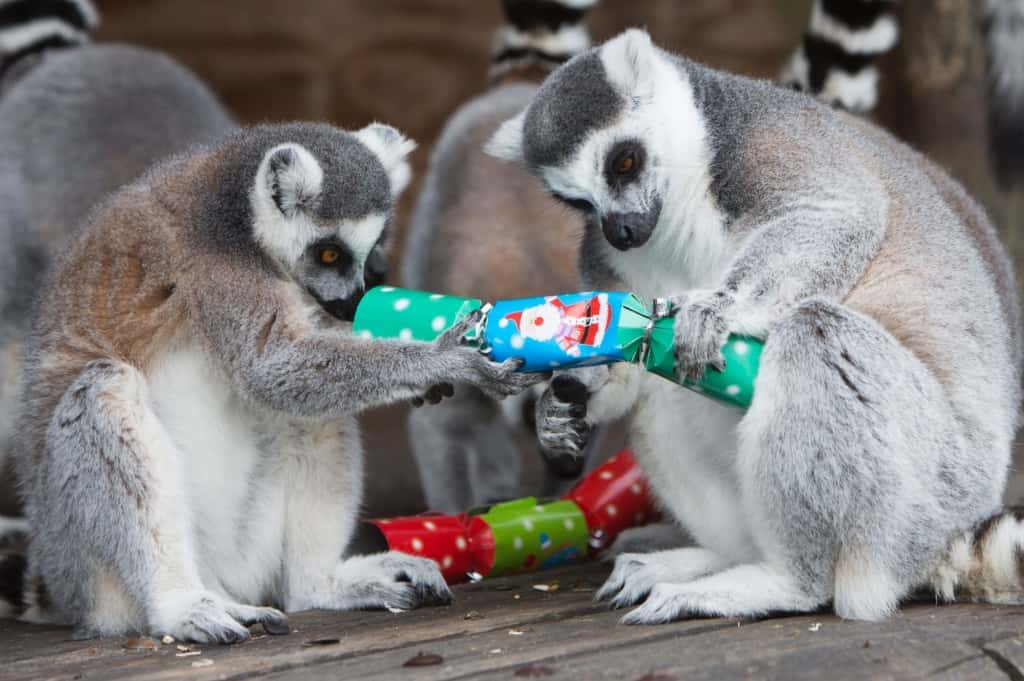 No sir, these lemurs do not actually like to move it, move it. They do however, very much enjoy getting together once a year to pull crackers, exchange the awful jokes, and put on the silly paper hats. That’s what he hope they do, anyway. In reality, they probably just got given a few crackers by a photographer and actually hold no understanding of Christmas. We prefer to imagine it our way. Just think of those little lemurs in tiny paper hats telling knock knock jokes. Awesome. 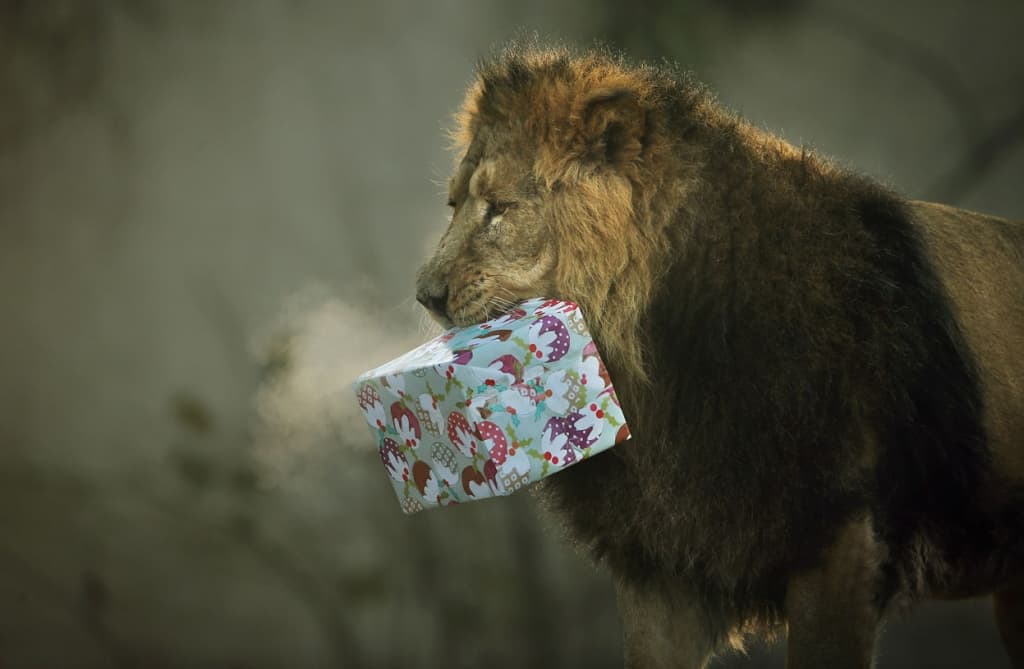 Wow. We genuinely had no idea that lions liked to celebrate Christmas. What do you mean, “It’s just another staged photo”? Man, why do people keep raining on our happy Christmas parade? Do you think he wrapped it himself? We like to think so, and we bet cutting the sellotape is a lot easier with sharp claws and teeth. What do you think is inside? Our money is either on The Jungle Book, or The Lion King box set. Or maybe the Sopranos season four, although that last one seems unlikely. 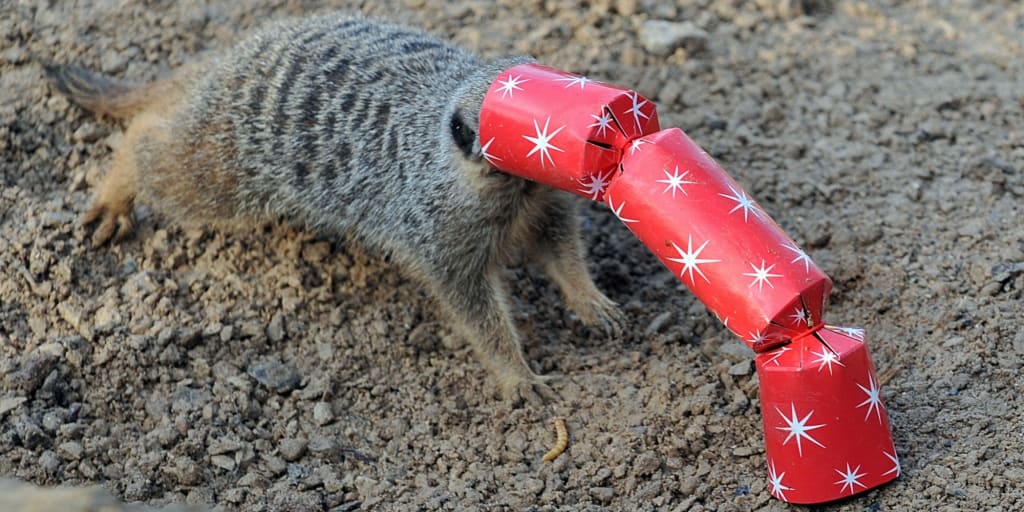 This poor little meerkat has no one to pull a cracker with at Christmas. So, faced with his own isolation he decided to retreat inside the cracker itself, so as to be alone. Not even the awful knock knock joke hidden within could lift his spirits. Hang in there little buddy, maybe Santa will bring you a friend for Christmas. Then you can have as much fun as those lemurs from earlier. They really were loving life. 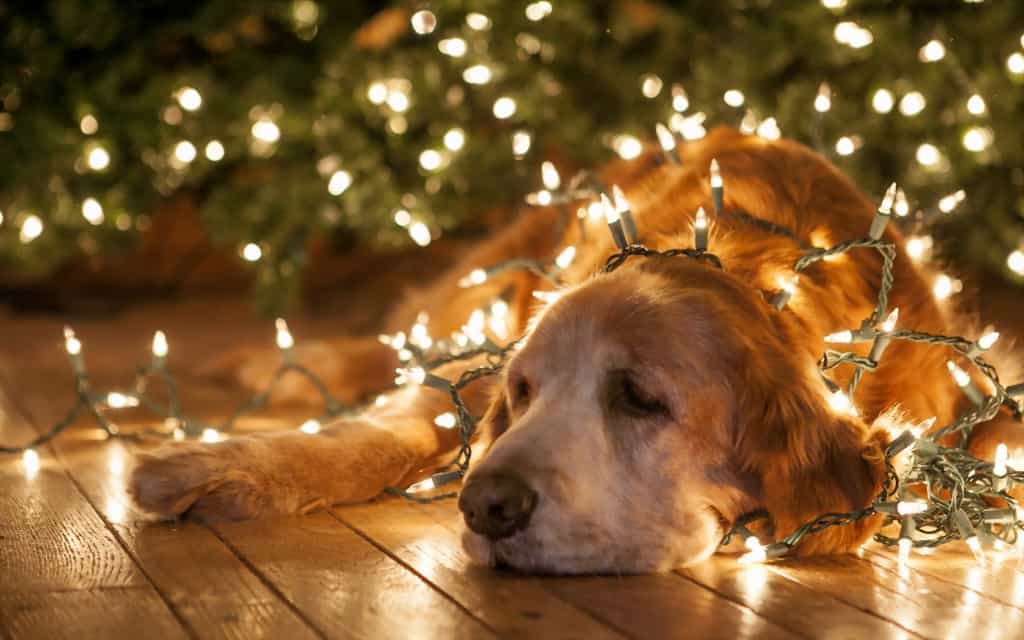 This poor fella was just trying to help trim the tree, but it seems the fairy lights got the better of him. Obviously, he decided the best thing to do would be to just lie down and wait for someone to come along and help him out of his tangled predicament. Of course, instead of doing what most would consider to be the right and Christmassy thing to do, someone decided this would be a good opportunity for a cute festive snap, so instead of helping out, they reached for the camera. Real nice, guys. 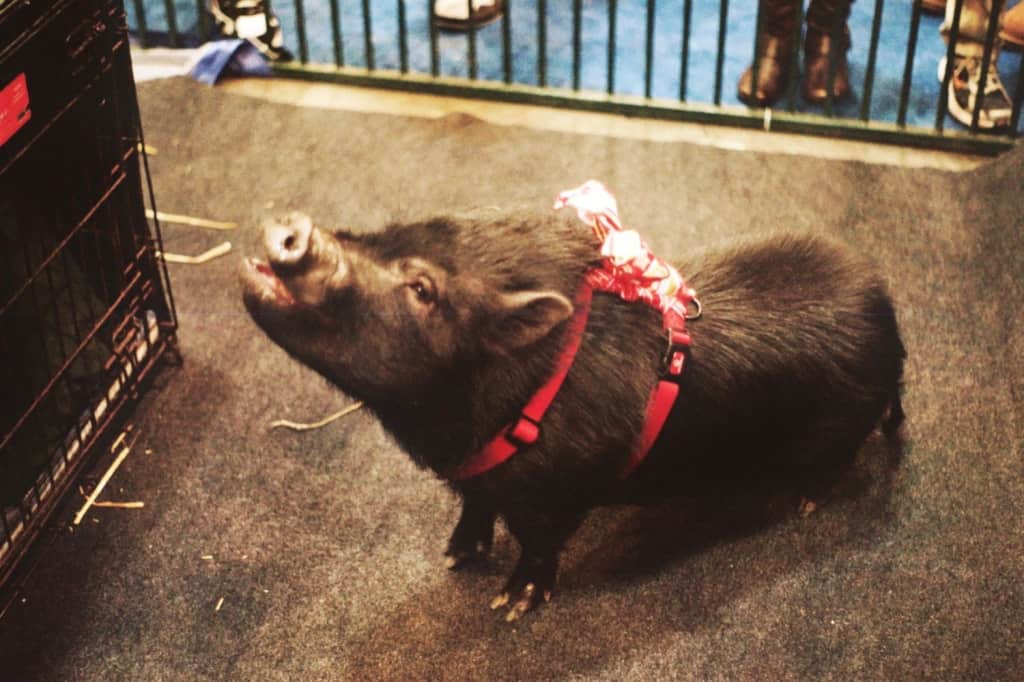 Time for a story. Every year, on the 25th of December, all the good little boys and girls across the world are visited by a very special and magical creature called the Christmas Pig. Many scholars don’t believe that he is real, but we have exclusive photographic evidence of the Christmas Pig in the middle of his annual present delivery rounds. This story is gonna blow the internet wide open. Except of course, we’re telling a porky (see what we did there?). It’s just a cute little pig in a festive looking harness. But how cute does the Christmas Pig sound? We feel an idea for a kid’s storybook coming on…. 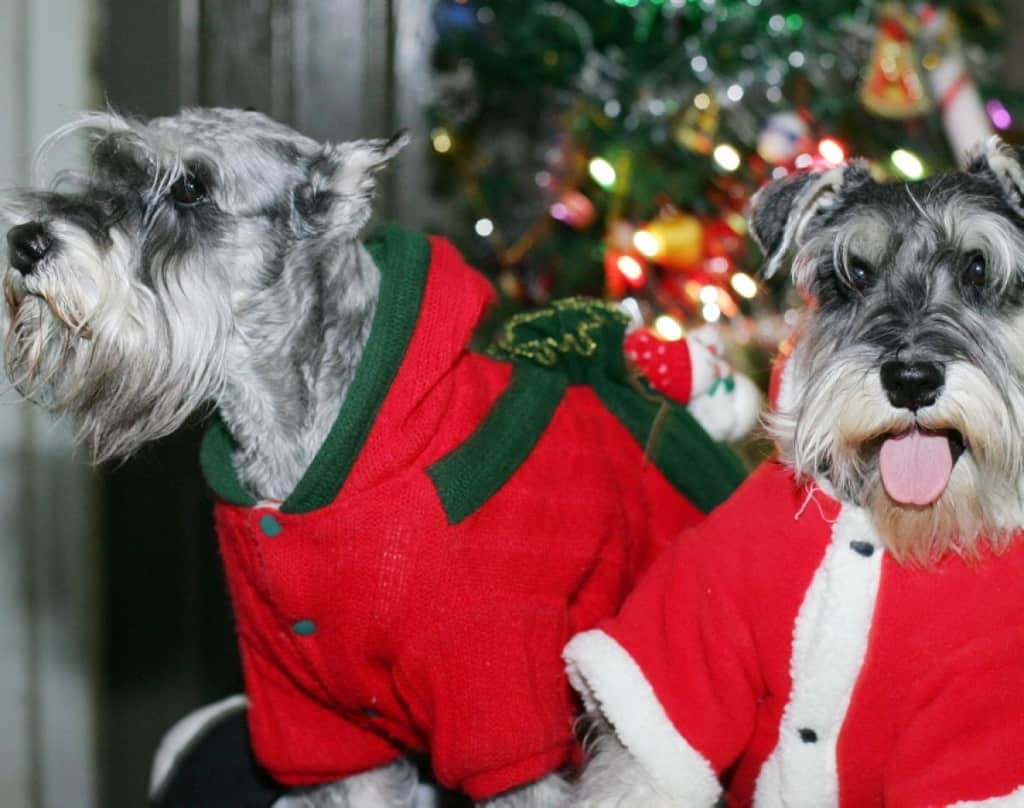 Usually Christmas jumpers make our eyes roll so violently that we can see the backs of our own skulls, but these two little pups manage to pull of their festive garb with real style. The pup in the Santa outfit looks mighty pleased with his own gift, while the other chap seems a touch more reserved. Perhaps he feels he should have gotten the Santa costume instead? Maybe they were once best friends, but their friendship fell apart after many years and now they have to pose, dead eyed, faking a friendship that is no longer there. Probably not though. They’re probably just normal, happy dogs feeling the Christmas love.

Not a Creature Was Stirring… 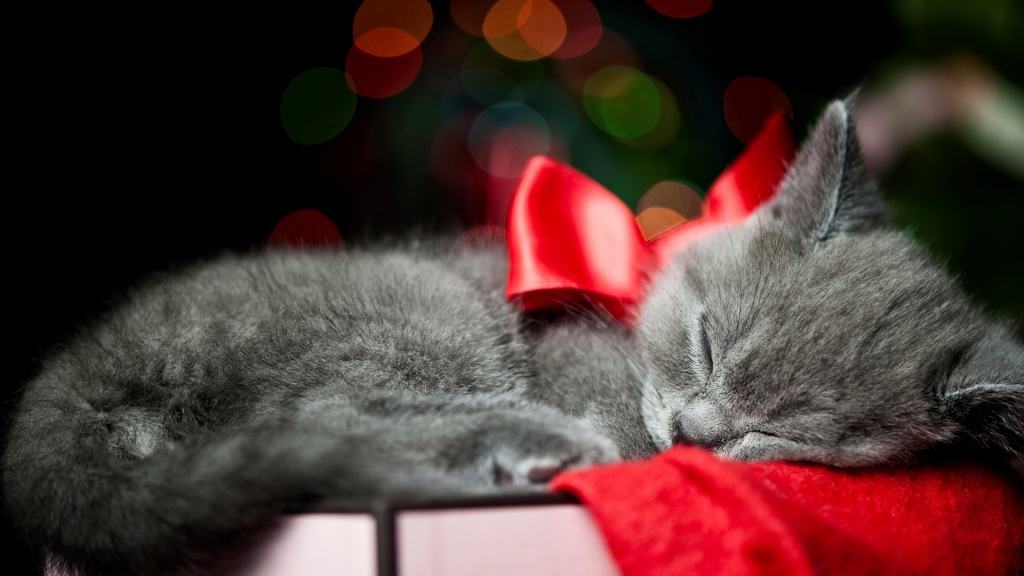 …Not even a kitty. We can’t think of a better image to leave off with than this adorable little kitty cat all wrapped up in a bow and snoozing away, waiting for Christmas day. This is actually the only festive themed cat we managed to find in the entire internet who doesn’t look like he wants to pull our eyes out through our mouths. And even then, that’s probably only because he’s asleep. Just wait till he wakes up… that’s when the real hell begins and he unwraps all the presents, destroys the tree, and pees on Santa’s leg while he’s munching on a cookie. Conclusion: Christmas is great, but cats will always be pure evil.