20 Hilariously Cranky Notes Left By People Working In An Office

While we loved everything about The Office and Parks and Recreation and wished we worked with people like that, most of us working in an office don’t have the same experiences. Whether it is someone stealing your food in the refrigerator or someone taking too long in the bathroom, there is always that person in the office that annoys the heck out of everyone. Their coworkers have had enough and voiced their opinions in these hilarious notes! 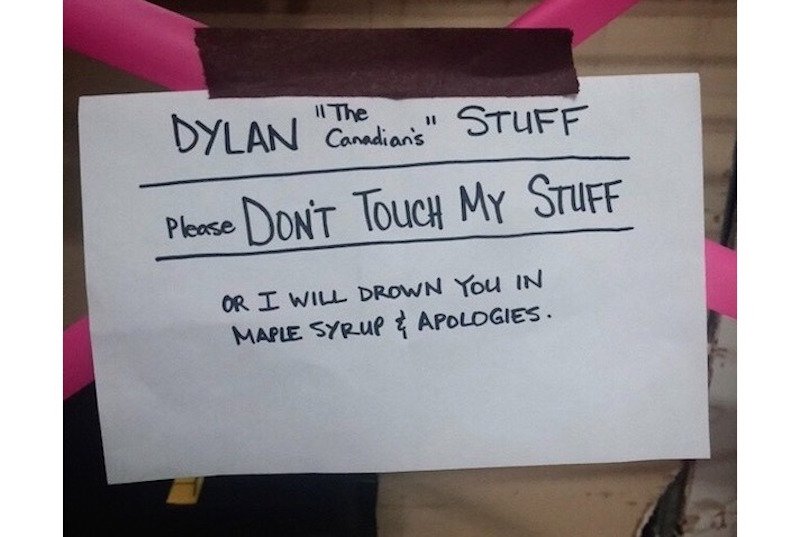 Those Canadian sure are tough! Dylan is sick of people touching his stuff, so he is going to drown you in maple syrup if you touch it again. We might touch it just to see this happen! 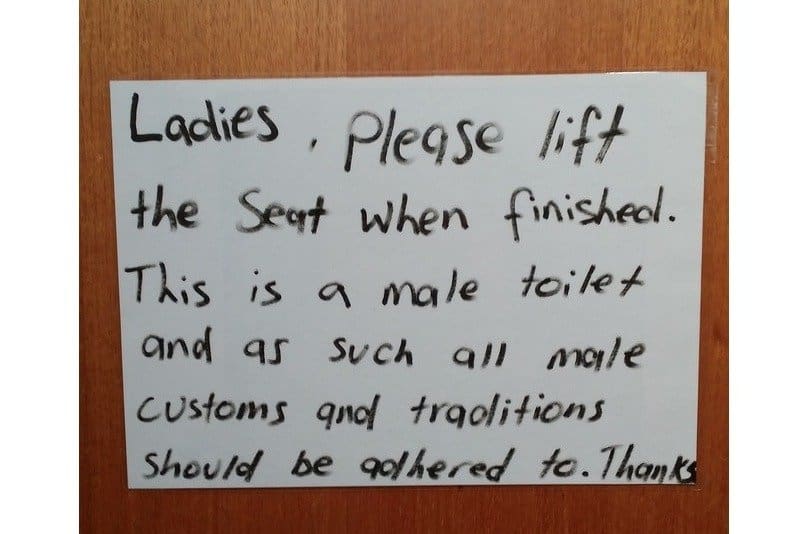 If women are going to demand that guys put down the toilet seat after using it, then men should be able to make the same demands in their bathroom, right? And why are the ladies using the men’s restroom?

Get Out Of The Bathroom 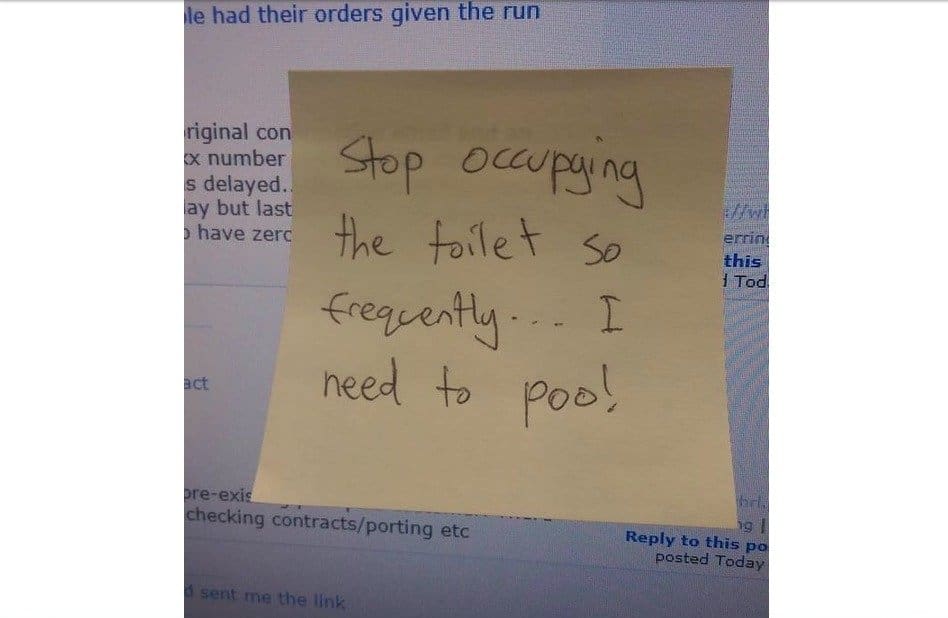 It looks like the people in this office have eaten some bad food or something. They all need to use the toilet, but everyone is taking too long! 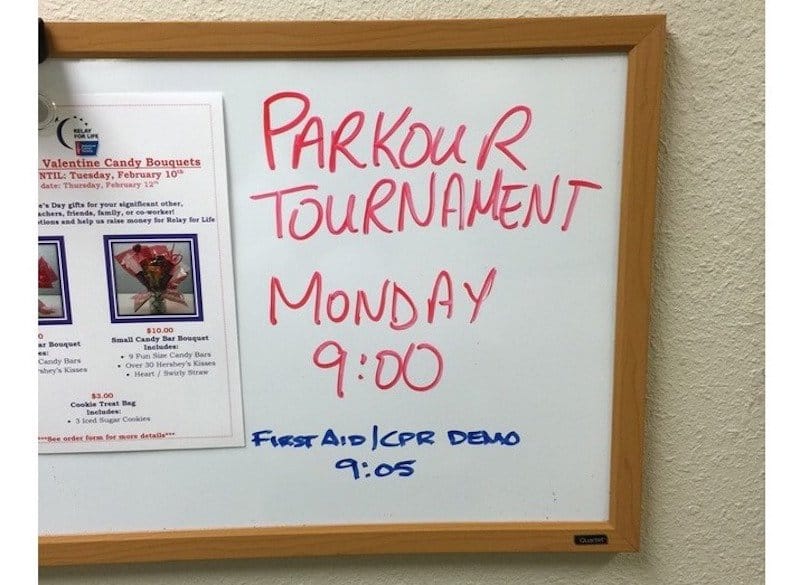 Parkour is training based on a military obstacle course and has you using your own body to move from Point A to Point B. It can be very dangerous, as this person was very aware of! 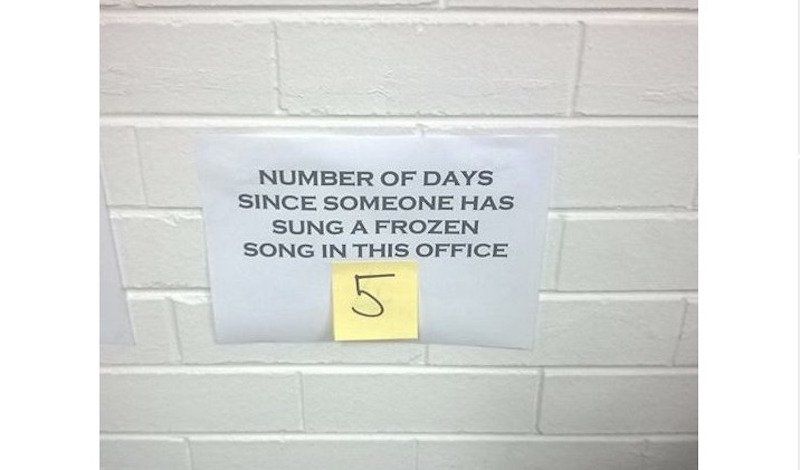 It looks like Frozen had taken over this office, so they started a tally with the number of days without a Frozen song. They almost made it a whole week, so keep it up!

Watch Where You Put Your Food 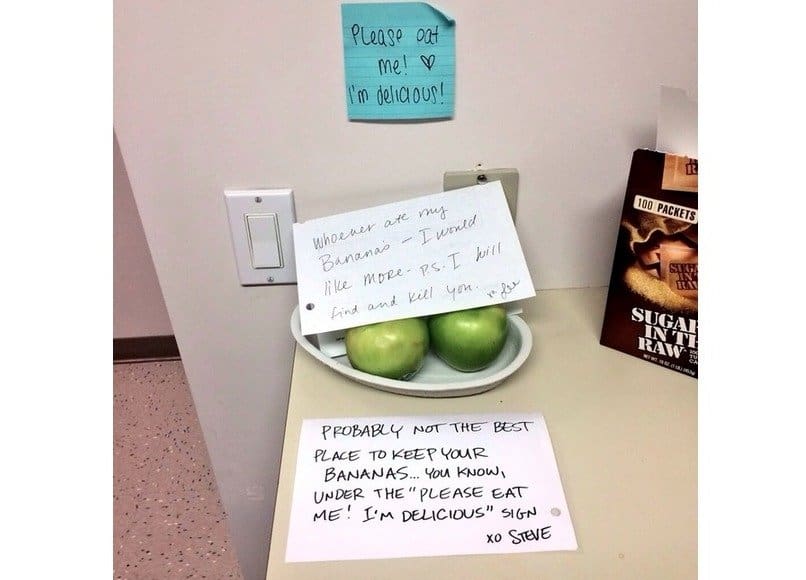 If you are going to put your bananas in a bowl with a free food sign above it, don’t get angry when someone eats your bananas! Watch your surroundings, people. 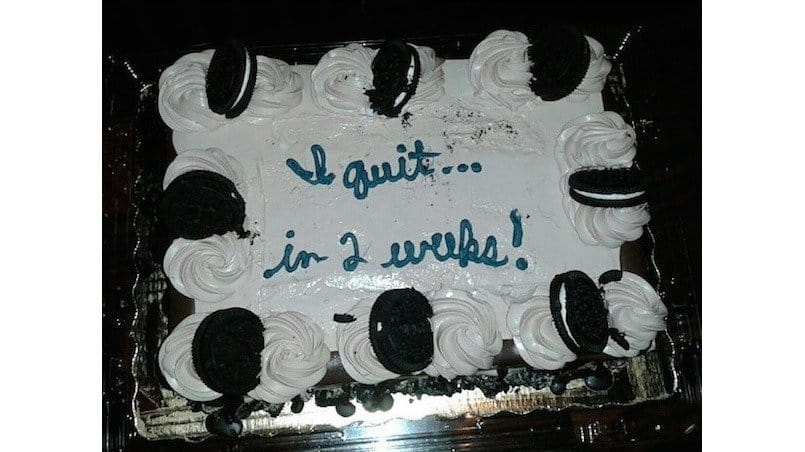 This is a unique way to put in your two weeks notice, but we like it. The cake does not look that appealing though, so maybe they are trying to poison everyone before they leave. 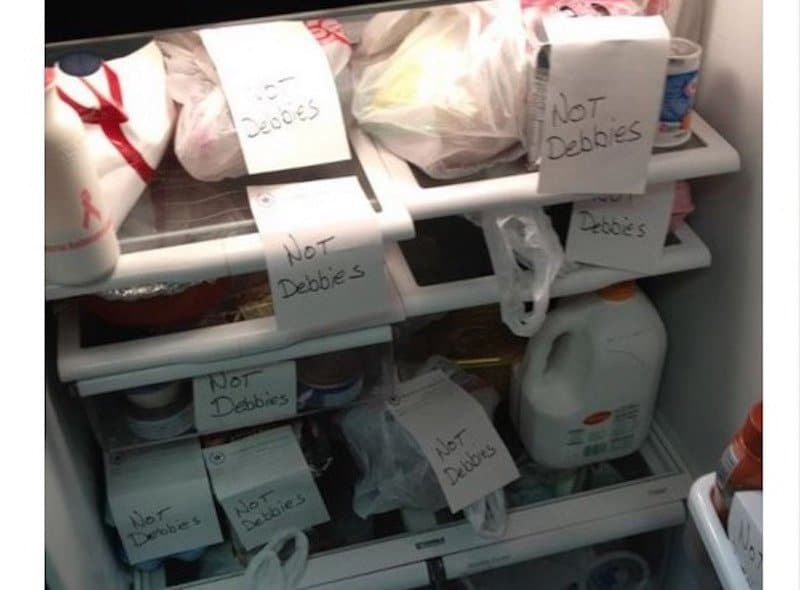 From the looks of it, Debbie may need to attend a Shoplifters Anonymous meeting. Or she needs to go to the grocery store and start bringing in her own food to eat while at work!

The Building Has Feelings Too 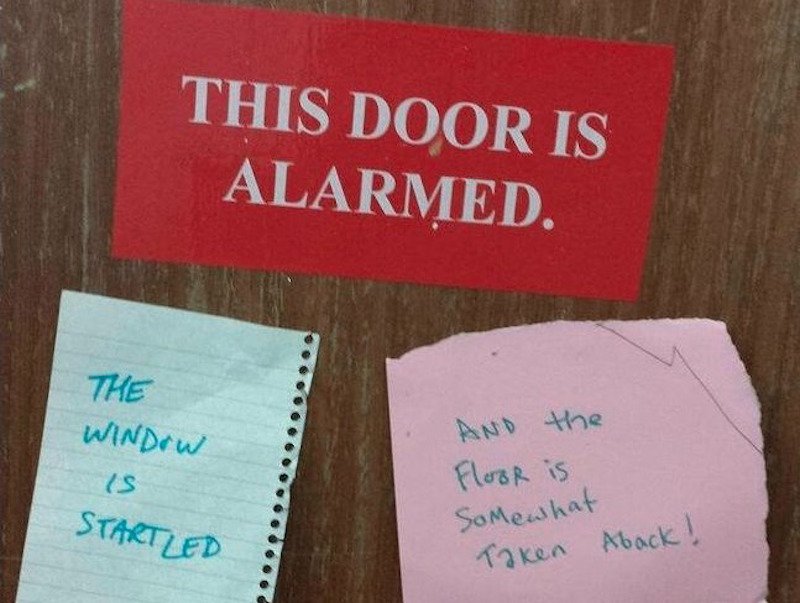 Since the door was alarmed, it looks like the window and floor were feeling the same way. A clever way of adding some humor into the office. 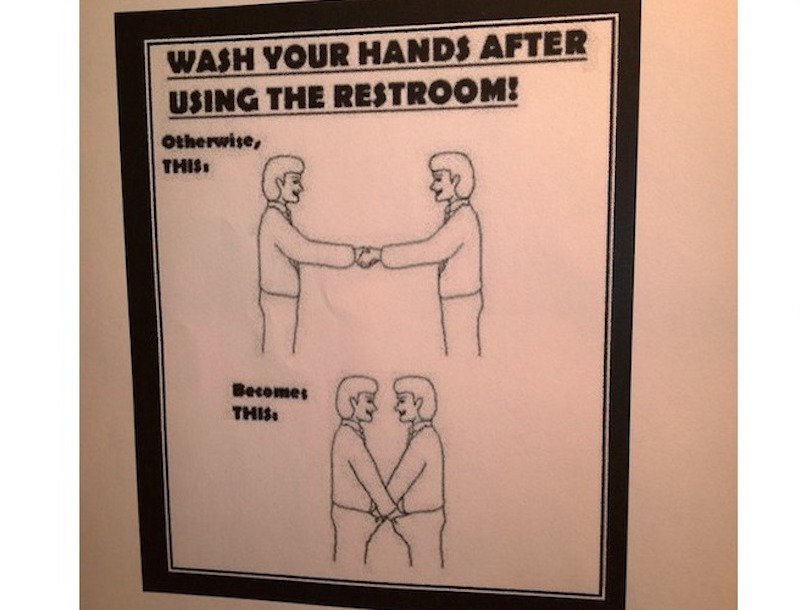 Is this an appropriate sign to hang up in the office? Would HR approve of this? It may be inappropriate, but how truthful is that sign?

Too Much Free Time 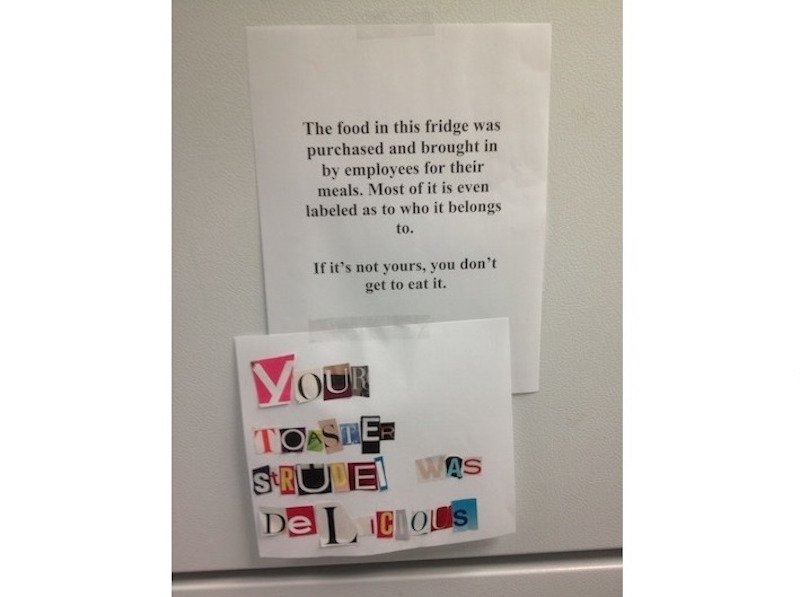 This person was angry about people eating their food, so they posted a note. Someone in the office had a little too much free time on their hands, as they are eating other people’s food and crafting signs to let them know! 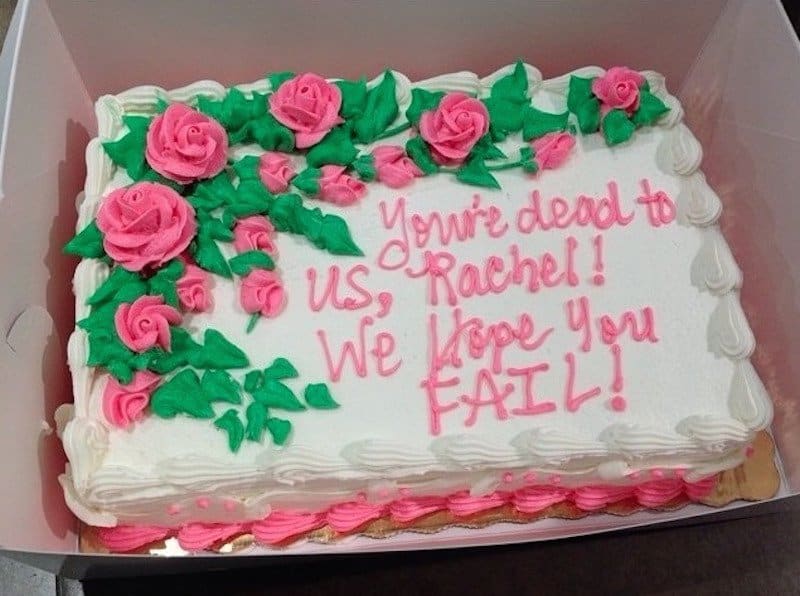 You can only hope that it was Rachel’s last day and they were sad to see her go, otherwise Rachel has some terrible coworkers. So much bitterness, but at least the cake had pink flowers and pink writing?

Just Take One Out 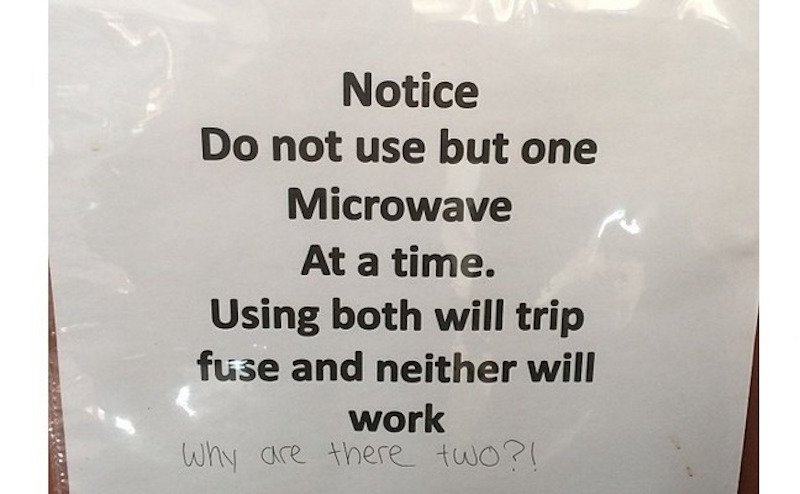 If you know that using both microwaves at the same time will trip the fuse, why not just take one of them out? That would save on tripping the fuse and having to make the sign!

Don’t Mess With The Pregnant Lady 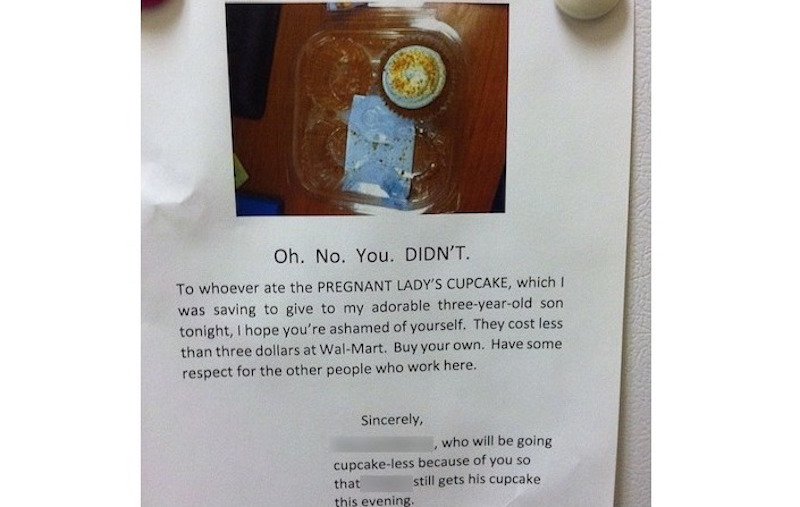 We get that she is pregnant and can have mood swings, but don’t call someone out on the cupcakes costing less than $3 and being so inexpensive. If they are so cheap, go buy some more after work and you and your son will both be happy! 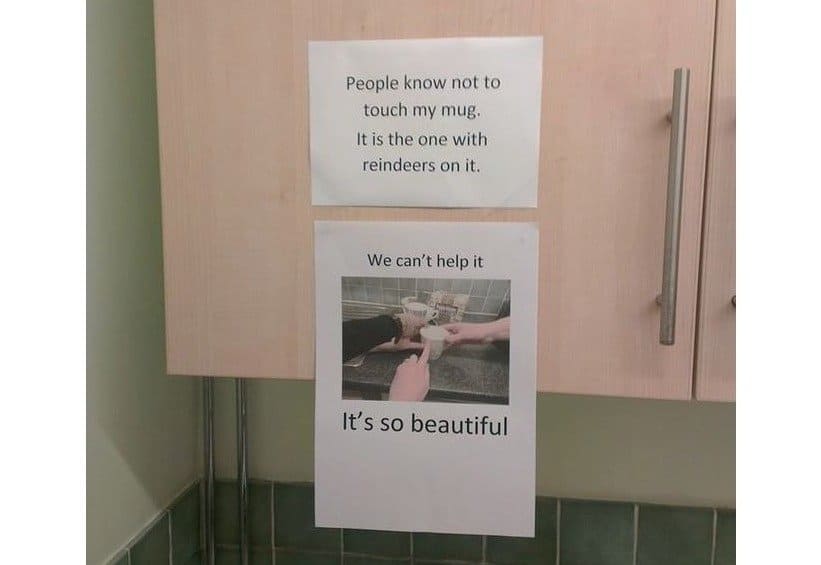 Don’t post a note asking people not to do something because they are going to do exactly what they are told not to do. Don’t touch your mug? Yeah, we are all going to touch it and take a picture doing it! 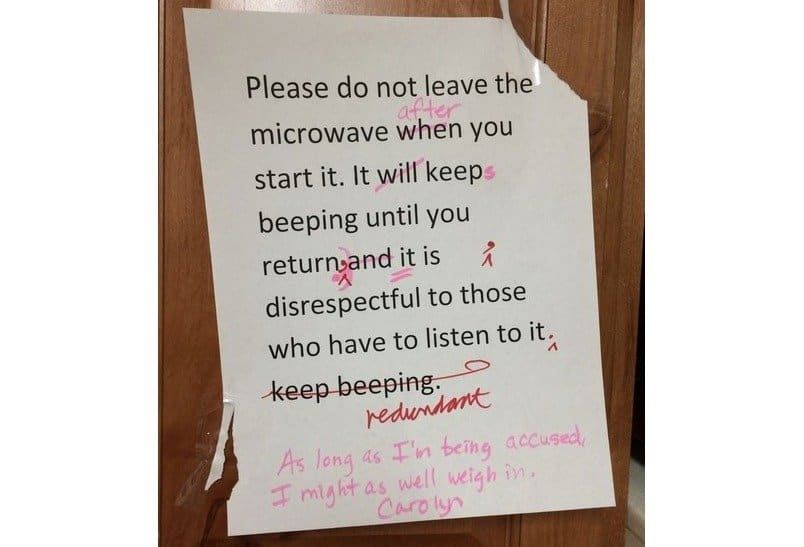 You should spellcheck and grammar check your notes before posting them. Otherwise the Editor-in-Chief of the office will come through and do it for you!

Have Some Human Decency 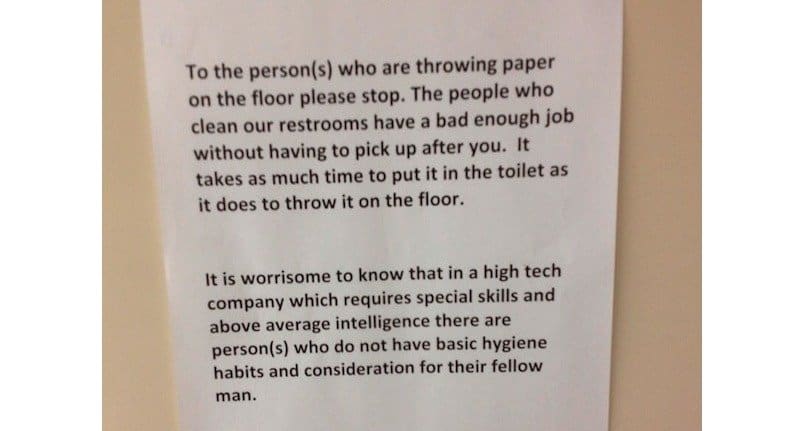 This is a very long note, especially since it is telling people to pick up their toilet paper in the bathroom. It seems like someone has some pent-up anger they need to work through. 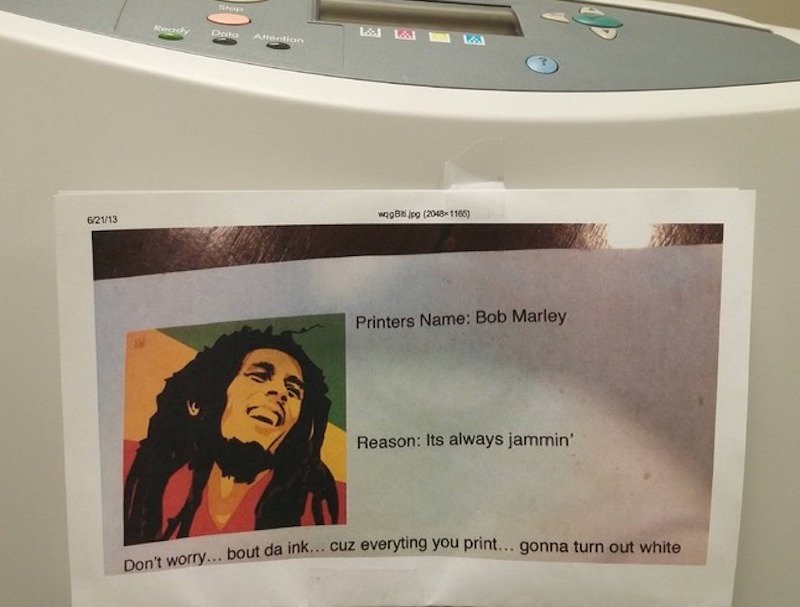 This person named the printer and proceeded to write a little song about it. They talk about the printer jamming and not having any ink, but this note seemed to print out fine! 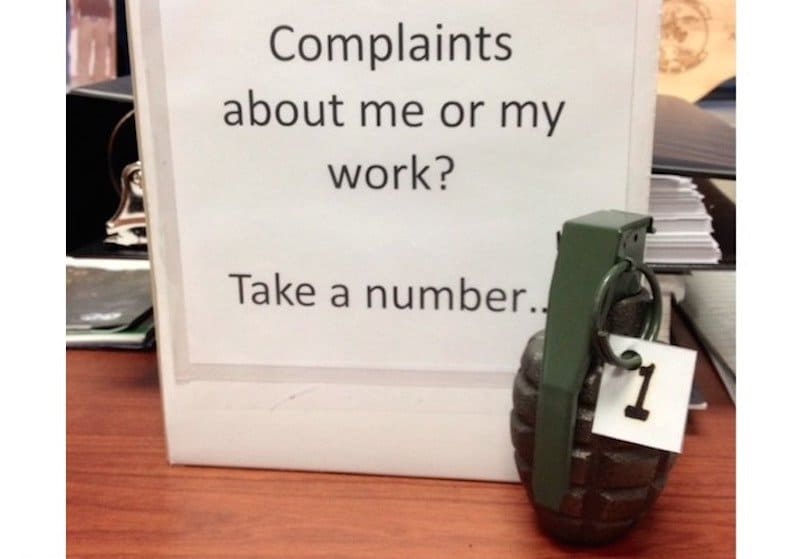 At least this person is willing to take your complaints, right? However, it might be a bit risky to voice those complaints to them. We’d just put up with their issues and make no complaints! 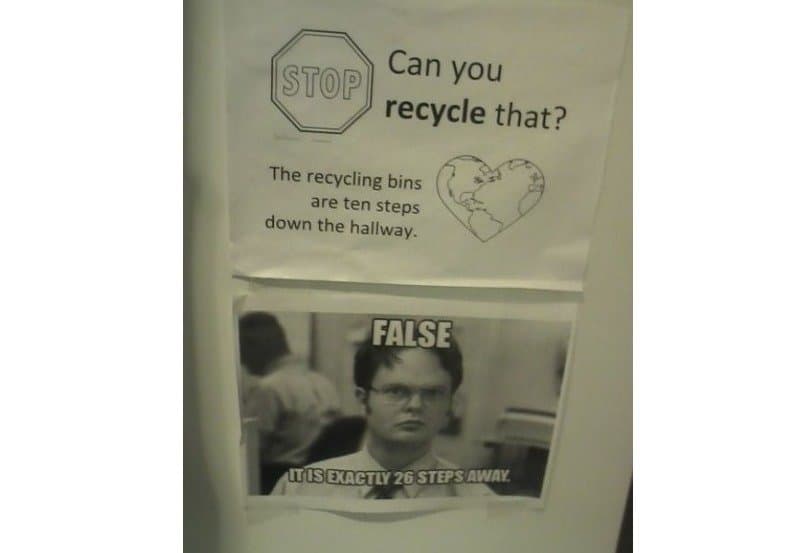 If you are going to put up a sign, make sure what you put on there is true. This person called you out with the number of steps needed to make it to the recycling bin. Maybe the person who made the first sign takes big steps?