20 Ghost Photos That Will Keep You Awake At Night

Depending on your personal disposition, the following photos will either give you insomnia or make you chuckle. Also, most of the following pics have been inspected by experts to make sure they have remained unaltered. Some will make you scratch your head, and others will cause a tingly sense on the nape of your neck. Maybe you’ll start seeing things out of the corner of your eyes. But after all is said and done, we can only speculate upon the following photos, no matter what feelings they may inspire. One thing is certain, though: ghosts have a funny habit of photo-bombing the living. 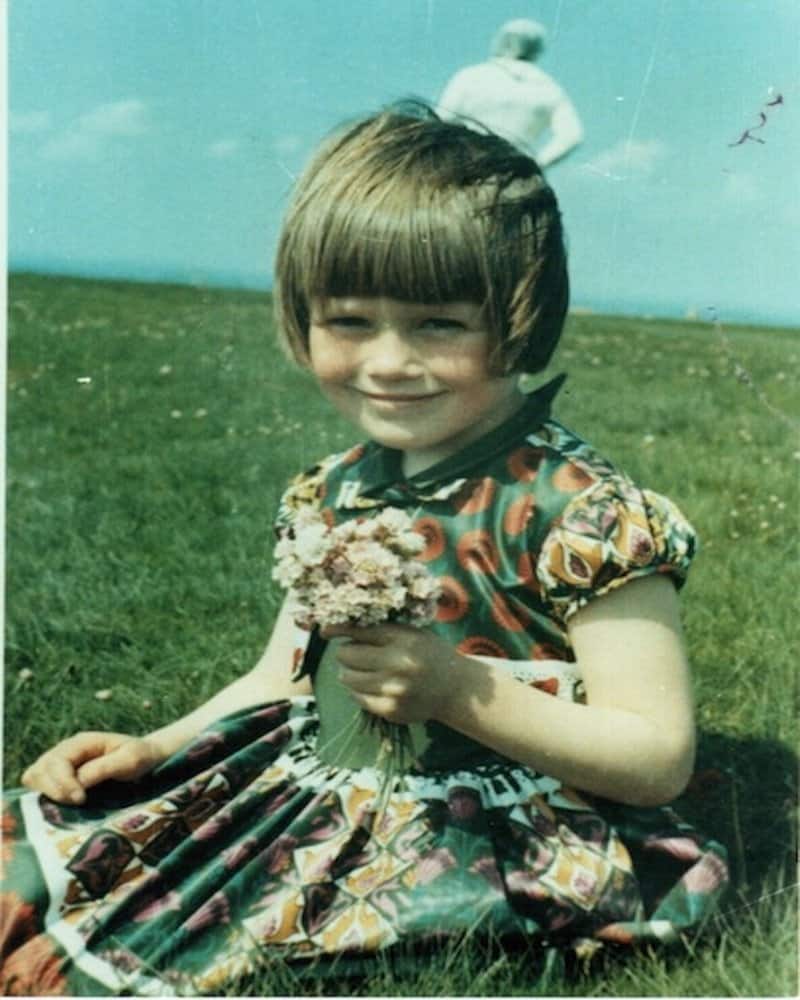 On May 23, 1964, firefighter Jim Templeton of Cumberland took some photos of his family hanging out in the marsh. He claimed there was no one else around except for a couple of old ladies sitting in a car. He took this picture, and what’s more, Kodak later confirmed that this photo unaltered. If it is a space traveler, as many people believe, it definitely has a sense of humor: it pulled off one of the best photo-bombs of all time. 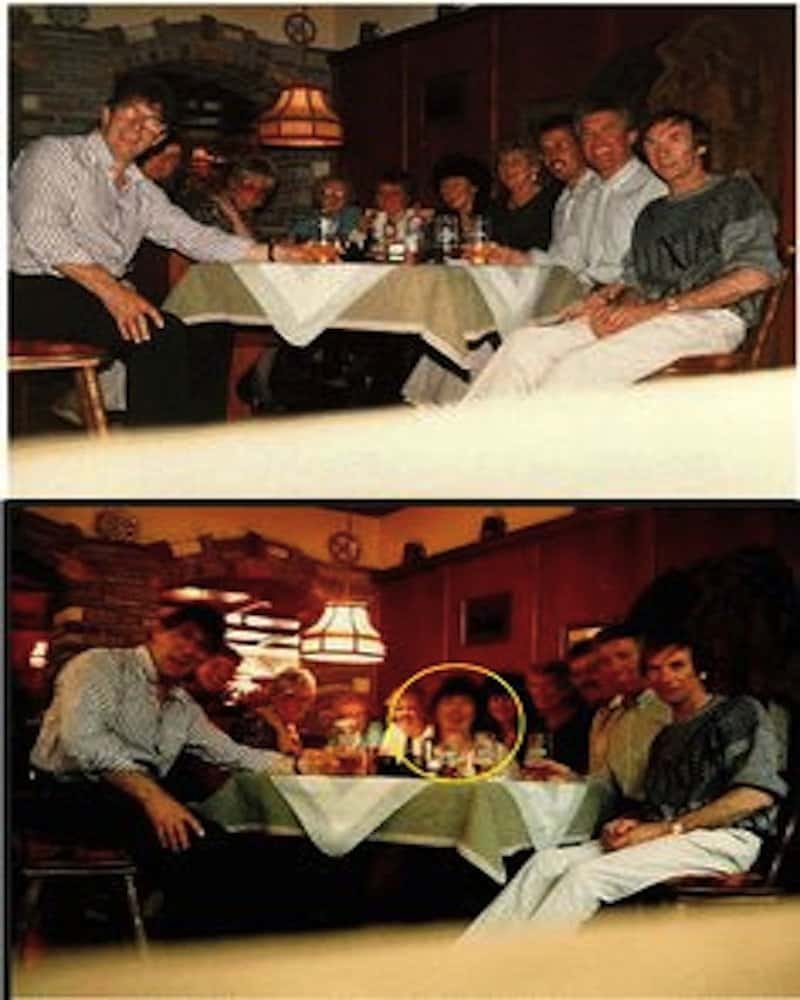 Two photos were taken back to back in a hotel in Austria sometime in 1988. A group of friends decided to to a farewell photo. A man in the group set his camera up with a timer, then rushed to sit back down. The camera clicked, but peculiarly the flash failed to go off. He repeated the process, and the camera functioned properly on this second attempt. Only when reviewing the film did they find an extra guest sitting at the table in the photo where the camera had malfunctioned. 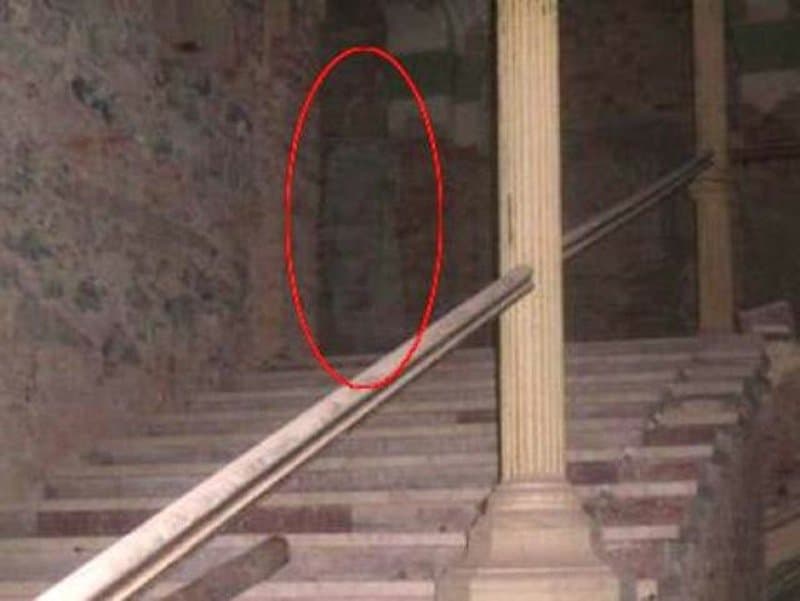 Authorities have warned the public to stay away from the hotel due to disrepair, but maybe they should be warned about the ghost! There had been rumors of a ghost resembling a woman wearing a white frock that is said to be protecting treasure buried under this Romanian hotel. This photograph, taken in 2008, was the first to capture the image of the rumored ghost lady and guardian. 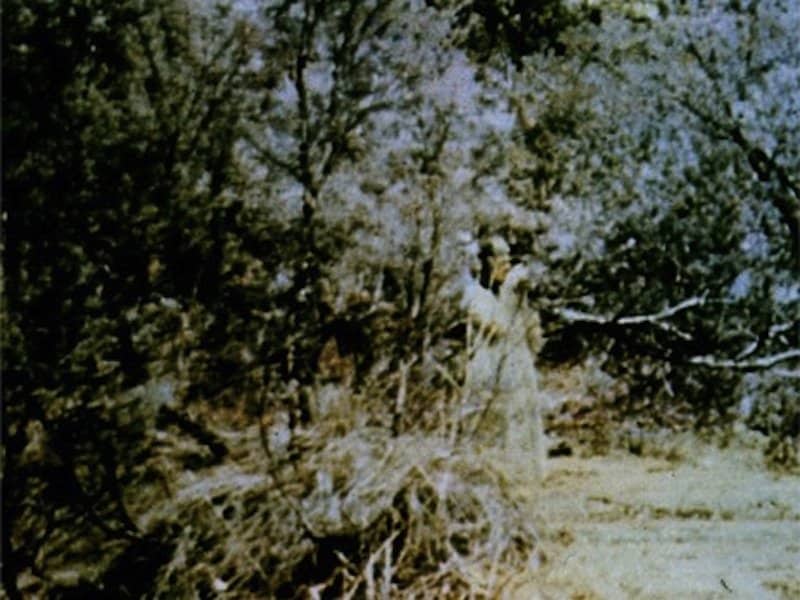 Taken in Alice Springs, Australia, in 1959. Some have argued this photo is a trick of the light or an example of double exposure. Whatever the case, the semi-transparent form of a woman is clearly present. People with more vivid imaginations have claimed the entity is a time traveler or interdimensional traveler. 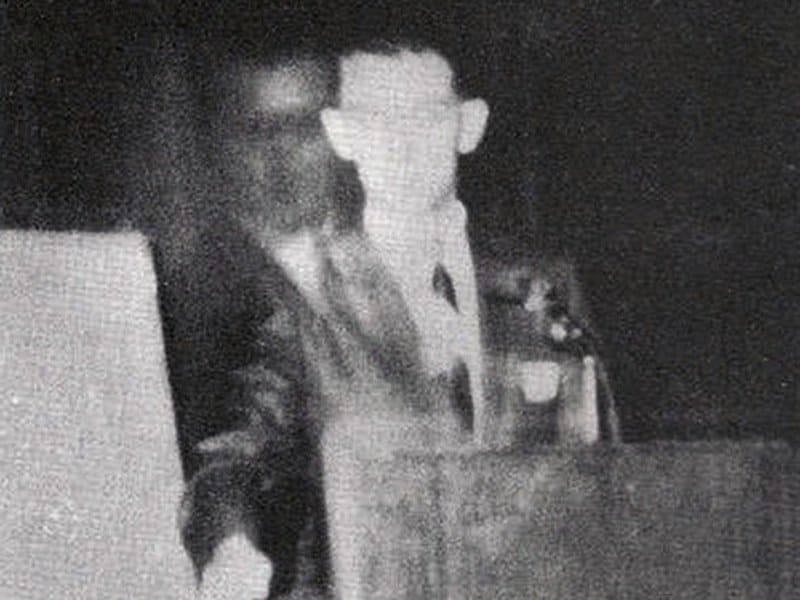 This photo was taken on November 16, 1968. Here, Robert A. Ferguson, author of Psychic Telemetry: New Key to Health, Wealth and Perfect Living is giving a spiritual talk at a convention in Los Angeles. Ferguson claimed the ghost was his brother Walter, who had died during World War II. Some might claim the photo is an example of double-exposure, but the photo is actually a polaroid. 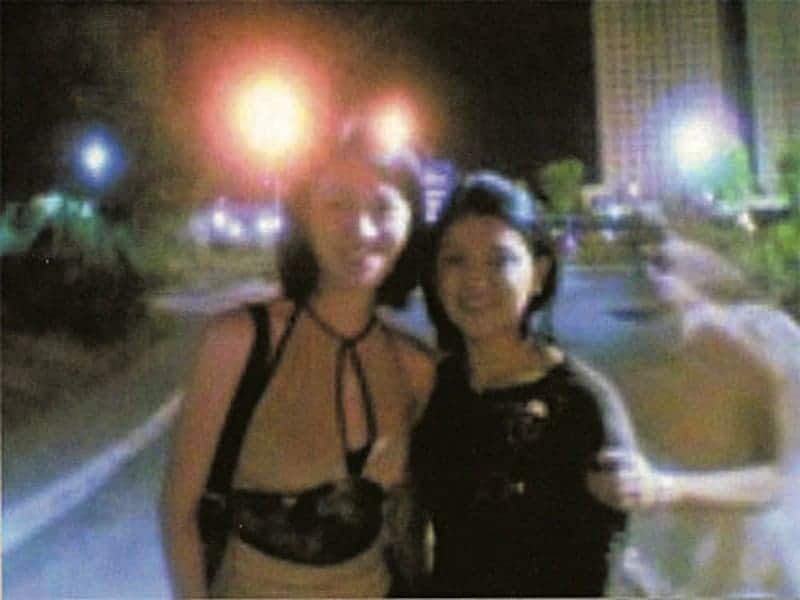 Ahhh, you might think ghosts only appear in dilapidated buildings or secluded sections of forests, but this ghost just wants a piece of the night-life! This photo was taken in Manila, Philippines, with a digital camera, which rules out the possibility of double-exposure. 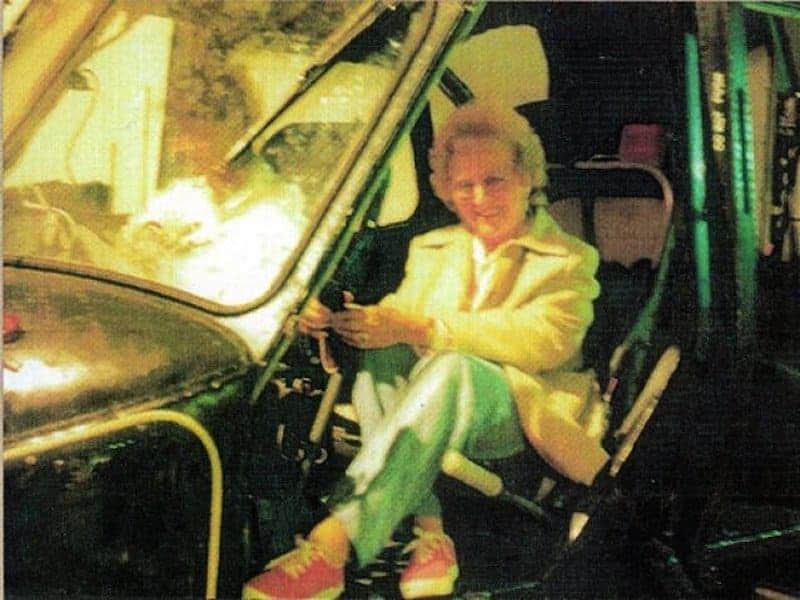 This is Mrs. Sayer at the Fleet Air Arm Station in Somerset, England, in 1987. The elder lady and her friends thought it would be fun to take a photo of her manning the cockpit of this old helicopter. She claims no one had been sitting next to her, but she did feel it was unusually cold when she sat in the cockpit. 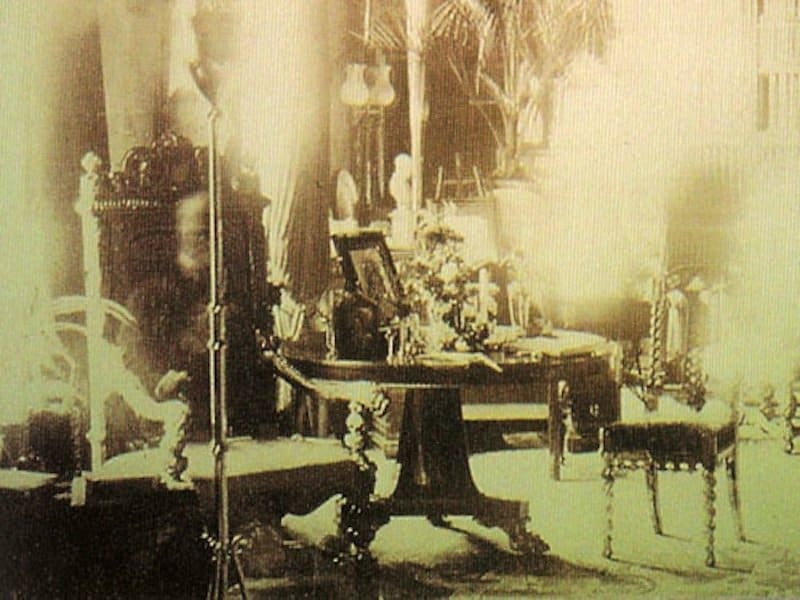 This photo of the Combermere library was taken in 1891. The ghost’s torso, right arm, and head are easily seen, but the ghost seems to have lost its legs. It’s believed to be Lord Combermere, who was a cavalry officer. The creepy fact is that this photo was shot while his funeral was taking place about four miles away. 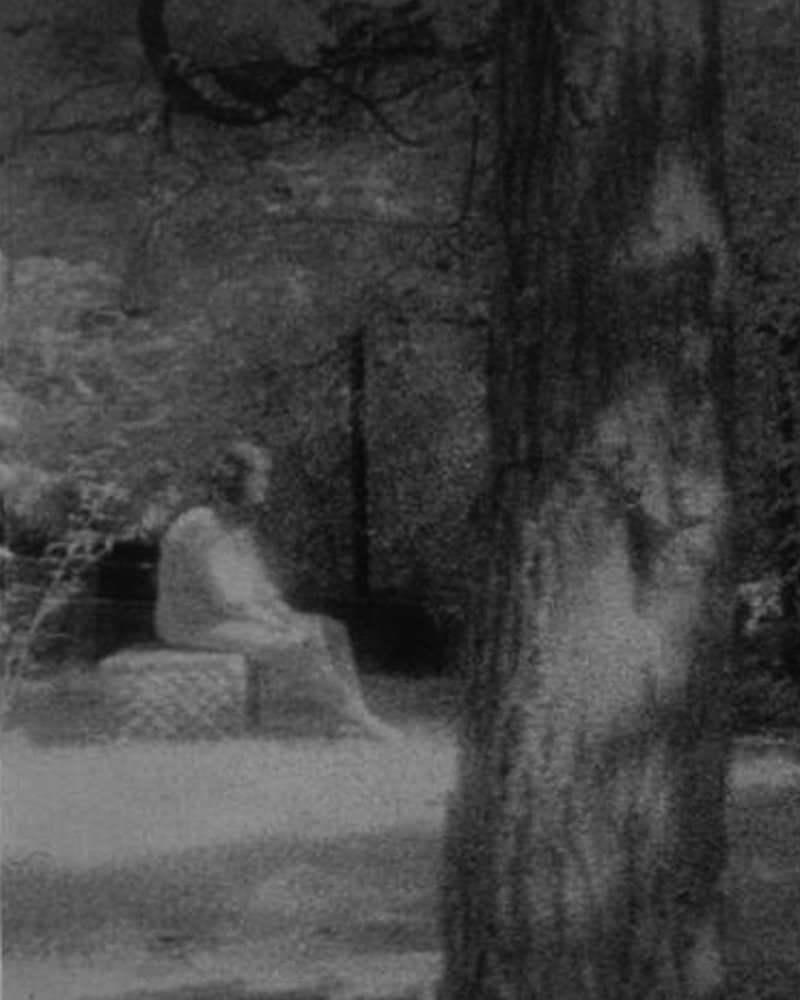 This photo was taken in Cook County, Illinois, in 1991 by the Ghost Research Society during an actual paranormal investigation. The cemetery where this photo was taken had been rumored to be haunted, and the photographer said he saw nothing prior to snapping the shot. At least this seems to be a peaceful ghost. What could she be reminiscing about? 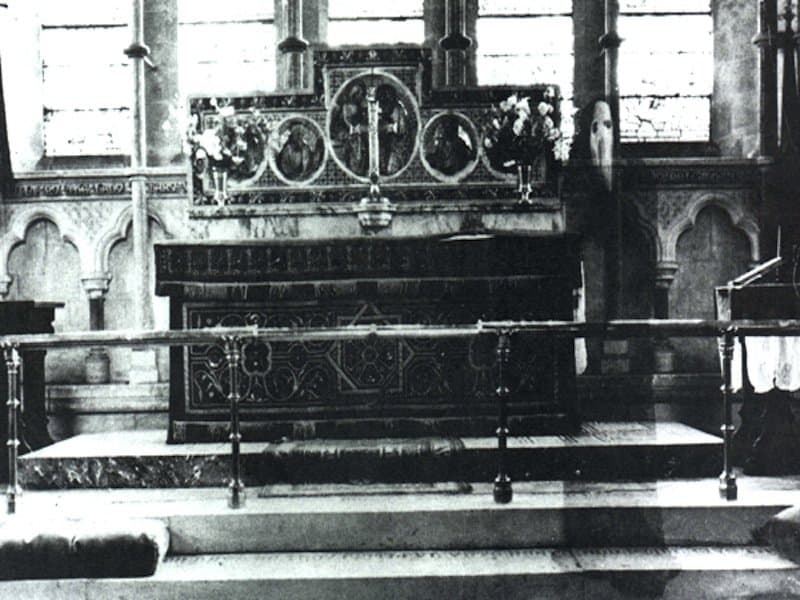 This photo was taken in 1963 by Reverend K.F. Laurd in Newby Church of New Yorkshire, England. What’s spooky is that photo experts claim this image is not the result of double-exposure, nor has it been doctored. But one thing is certain: now we know where the director of the film Scream got the idea for the villain. 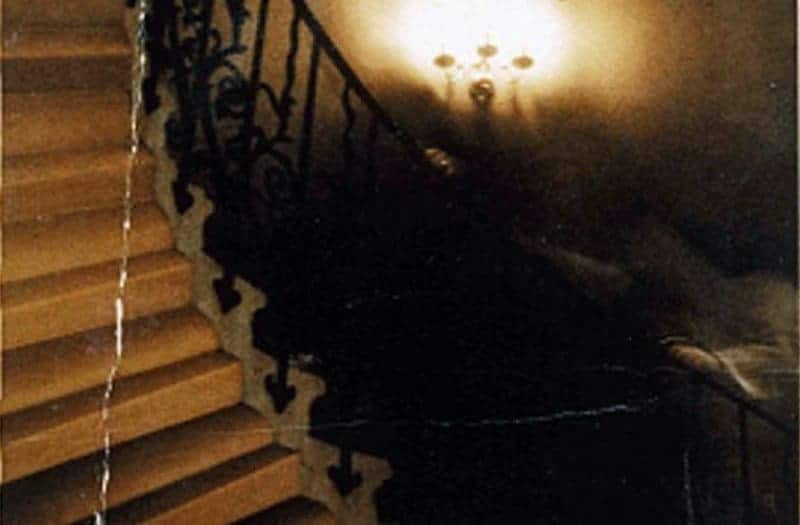 Retired minister Ralph Hardy of British Colombia took this photo in 1966. He was only trying to capture the picturesque Tulip staircase in the Maritime Museum. Unfortunately this shrouded ghost ruined the ambiance that Hardy was trying to capture. Furthermore, Kodak examined the negatives of this photo and claimed they remained unaltered. 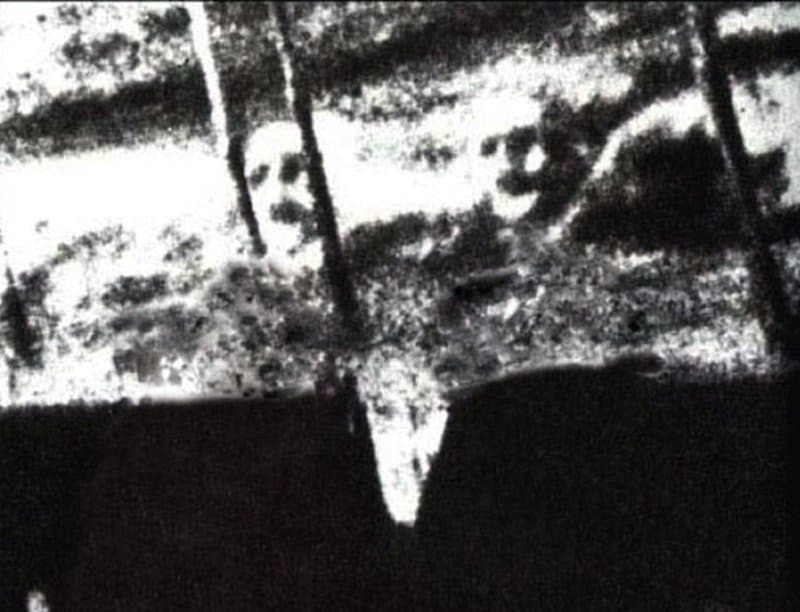 In 1927 James Courtney and Michael Meehan died from gas fumes while cleaning a water tank on SS Watertown. They were on route between the Panama Canal and New York City, so both men were buried at sea. Soon, however, the crew saw the faces of both men appearing on the ocean’s surface. The captain took this photo. 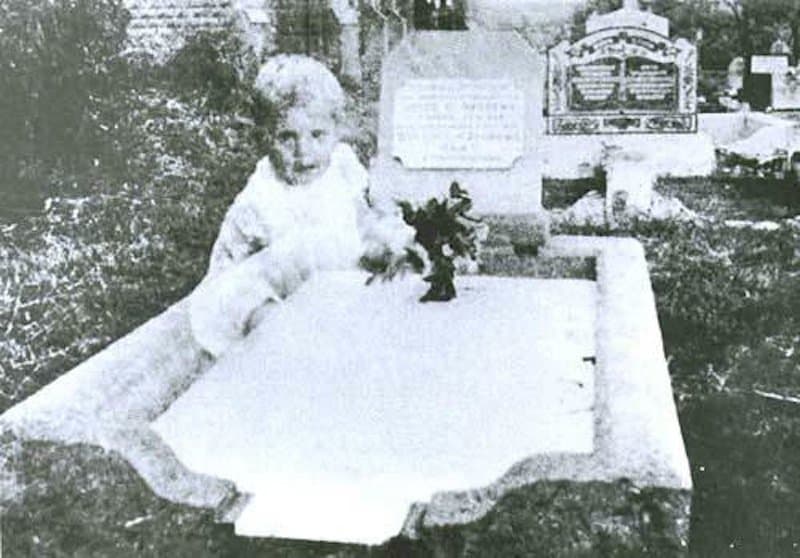 This photo was taken in Queensland, Australia, sometime during 1946. Mrs. Andrews, the photographer, was visiting the grave of her daughter, who had passed away a year earlier at the age of 17. Later, in the 1990’s, paranormal researcher Tony Healy found two unmarked graves of two baby girls. 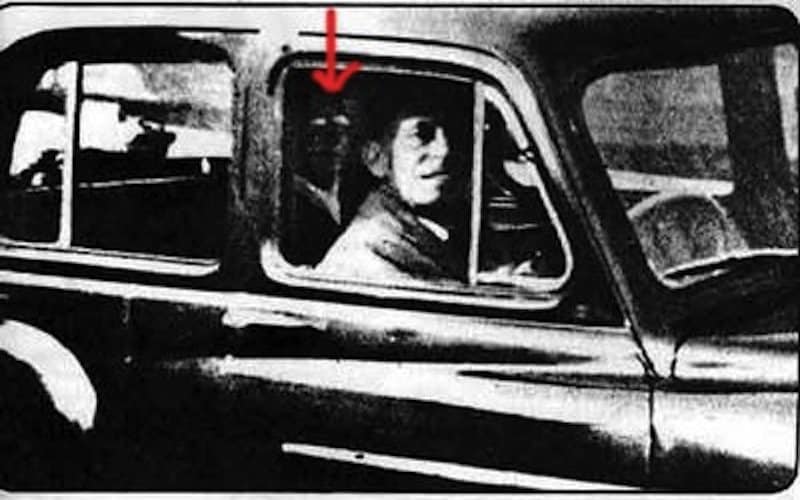 If you think backseat drivers are obnoxious, just imagine how annoying it would be to have backseat ghost driver! Mrs. Mabel Chinnery took this photo of her husband when they were visiting her mother’s grave. Later she recognized the ghost of her mother sitting behind her husband. We can sympathize with the husband: just when he finally thought he had escaped his mother-in-law, she comes back to have the last word.

Child in The Fire 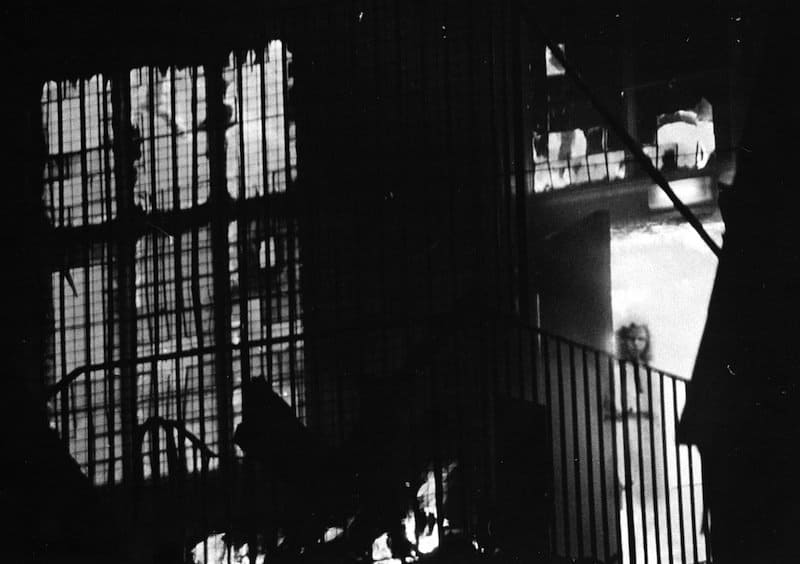 On November 19, 1905, Wem Town Hall of the U.K. caught on fire. One onlooker took a bunch of photos of the inferno, but when he later developed them, he found this picture of a girl standing almost calmly in the burning building. None of the firefighters and other onlookers said they had seen a girl. It was later speculated that this girl had died in the town hall sometime before the fire had taken place. 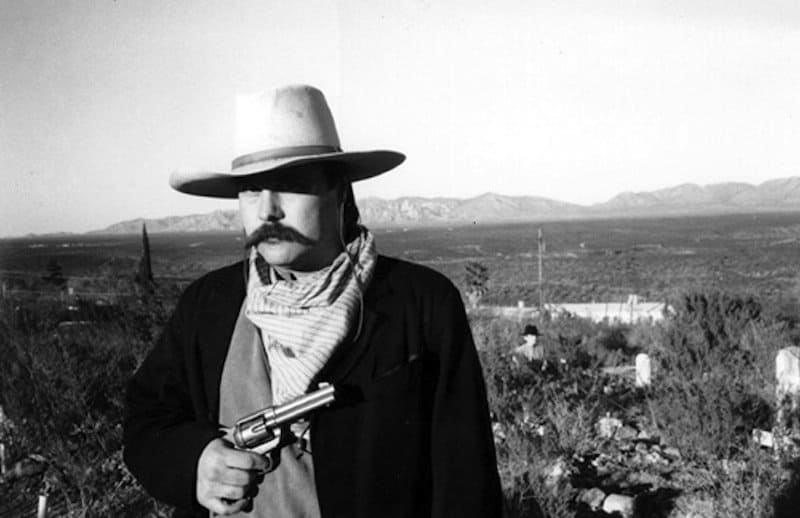 Taken in Tombstone, Arizona, in Boothill Cemetery. Terry Ike Clanton took this photo of a friend, and they were trying to recreate an image of the Wild West. Clanton, whose ancestors actually fought in the gunfight at O.K. Corral, claims there had been no one in the background. But it’s obvious what’s going on: the ghost is rallying from the grave for one last sally. 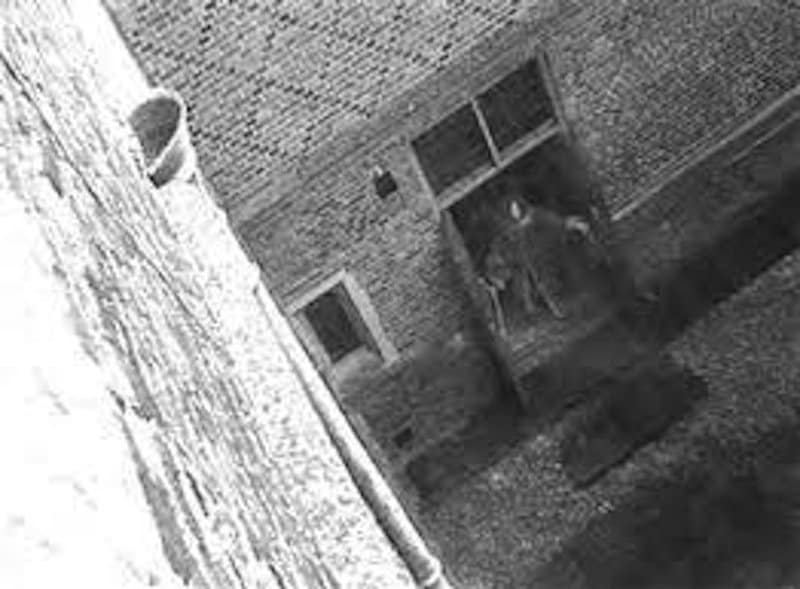 In 2003 security cameras captured this photo in Hampton Court Palace in London. Fire alarms had gone off at one point, but when security personnel rushed to the area they found the door closed and no one around. But the security cameras provided this picture of this ghost (nicknamed “Skeletor”). Some have speculated the ghost is one of Henry VIII’s wives. 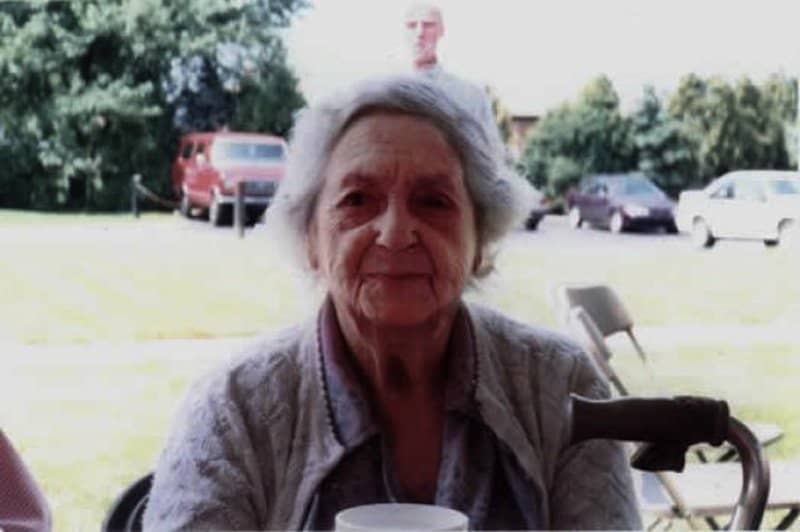 This grandma was moved to a nursing home in her early 90’s. This photo was taken by family members during a picnic at the nursing home. The family members claimed there had been no one behind this elder lady, and they recognize the ghost as the grandma’s husband, who had died some years prior. 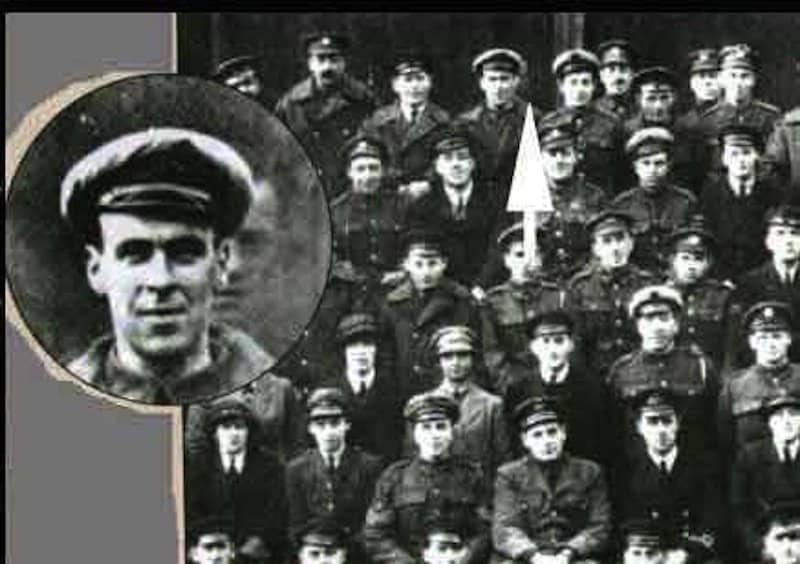 This photo comprises a squadron from World War I and was taken at a training facility. There was an extra face, though, the face of Freddy Jackson, an air mechanic who had died in an accident a couple days prior. The other members of the squadron quickly recognized Jackson’s face, and some have speculated that Freddy Jackson, unaware of his death, was reporting for duty. 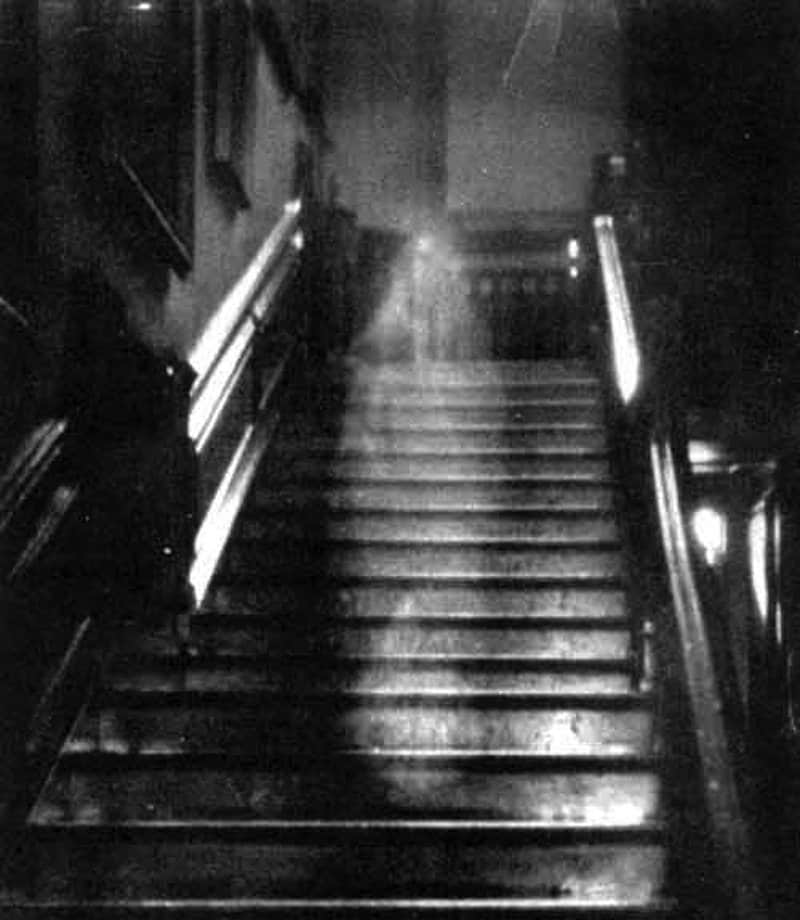 Arguably the most publicized ghost photo ever taken. Taken in 1936 at Raynam Hall of Norfolk, many claim that it is the ghost of Lady Dorothy Walpole, the second wife of Charles Townshend. Rumors say that Townshend, upon learning of his wife’s adultery, locked her up in the mansion until she died. Two buddies took this photo, and they claim they actually saw the ghost before they took the photo.