With more and more cars joining the roads every year it also seems to be getting more frustrating going anywhere and expecting some common decency from your fellow drivers. With more lunatics and idiots than you can throw a stick at, and more morons taking up two parking spaces every day, some people have had enough. It is these fed up heroes that we are taking a look at today with ten brilliant windscreen messages that you won’t forget. So next time you see an idiot on the road, think back to this list and leave one of your own. 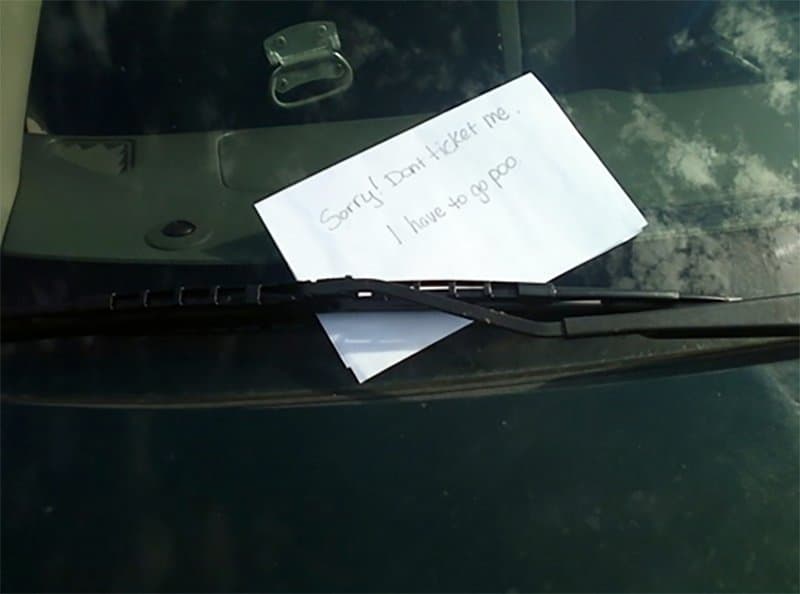 When nature calls, you have no choice but to answer and suffer the consequences. It’s nice to see someone gave this guy a break and had a laugh at his expense. 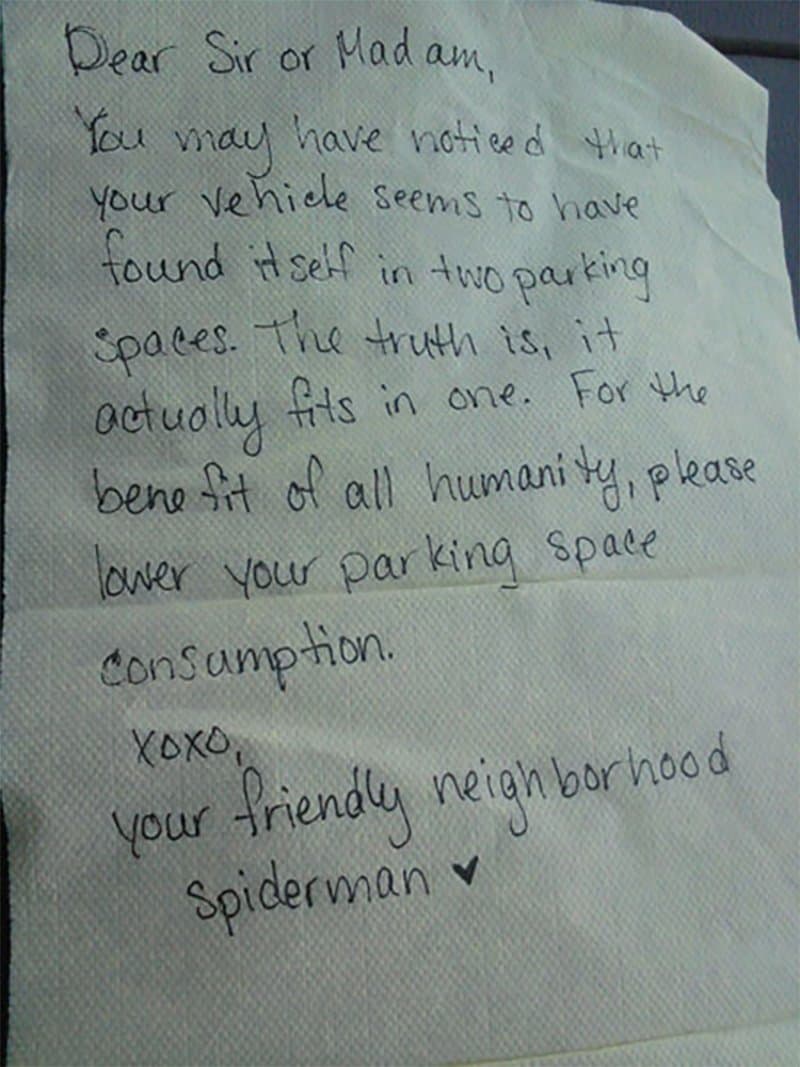 This is the most polite letter I have ever seen a villain of Spider-Man’s receive. Not that most of them receive many, they usually just get punched and tied up with some web. 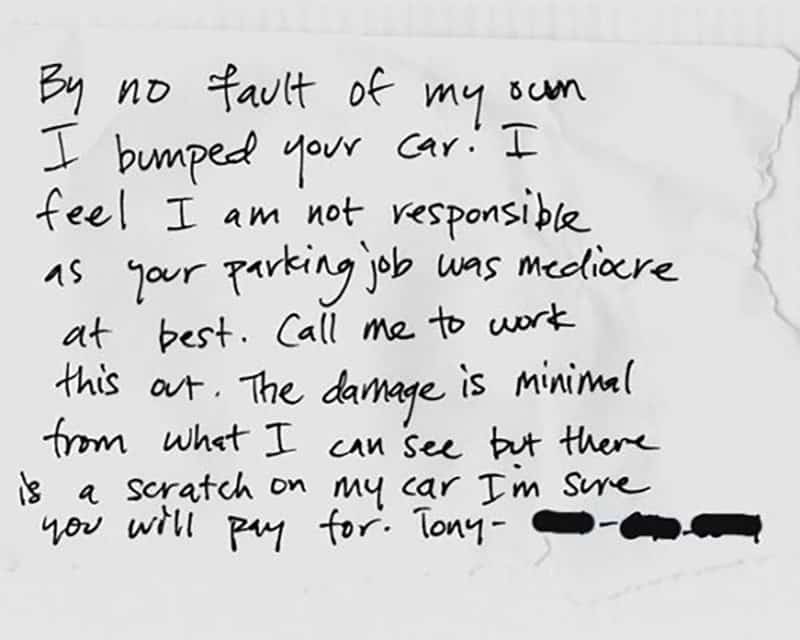 The law states that it is the person who hit another that is at fault, but when the other person parks like an idiot, is he really to blame? Well this guy doesn’t take any nonsense and gets straight to the point; you act like a moron, therefore this is your fault. Sounds fair to us.

Honesty At Its Finest 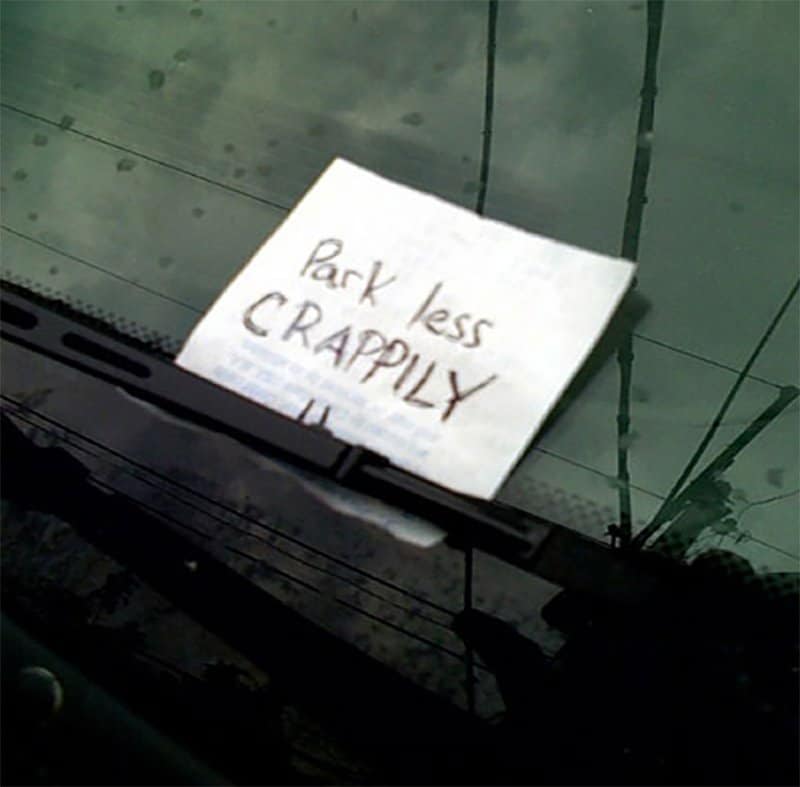 Straight to the point and about as honest as it gets. This is the best kind of advice to give and to live by. 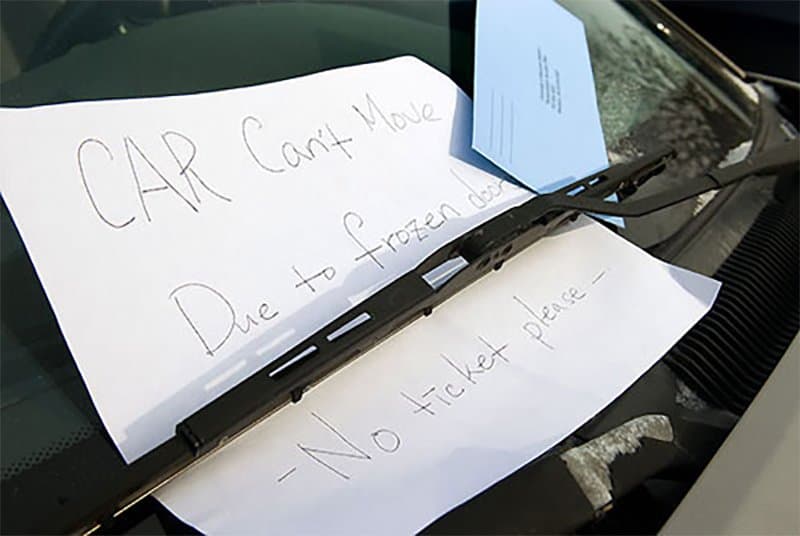 With the recent snow storms in the US, people are pleading for a little bit of mercy when it comes to parking their car. The little blue envelope seems to have shattered everyone’s hopes, though. 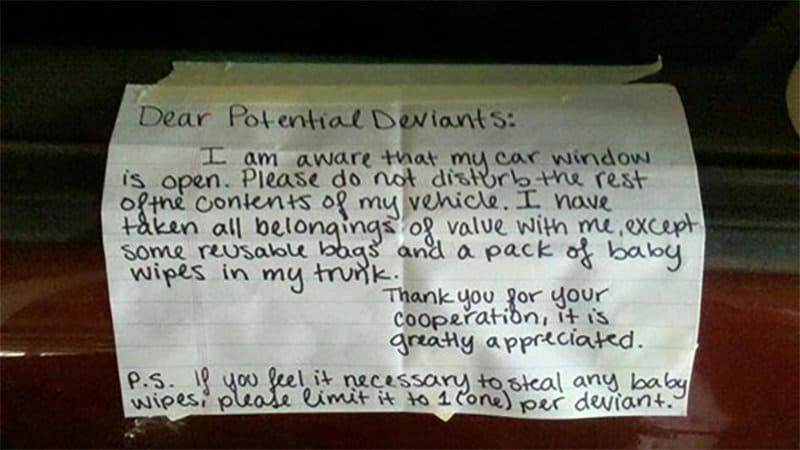 When you really need baby wipes – and you’re a deviant – feel free to help yourself to one. This lady is obviously prepared enough to take her stuff out of her car and prepare a note, it’s just a wonder she hasn’t gotten a new window. 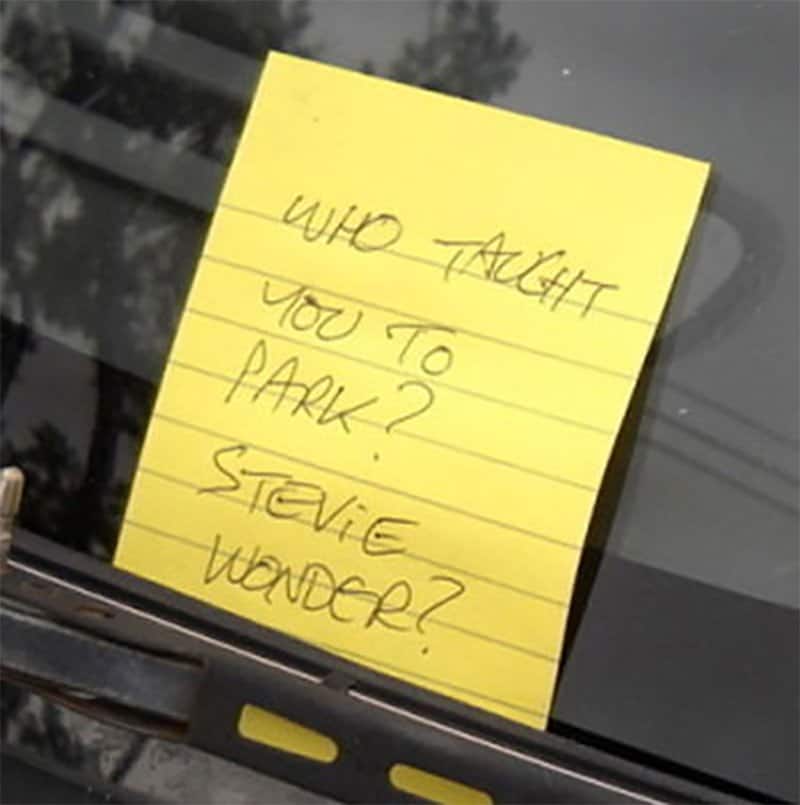 Well, when your parking instructor is a blind man, you’re not going to have a great time, and neither is everyone else around. 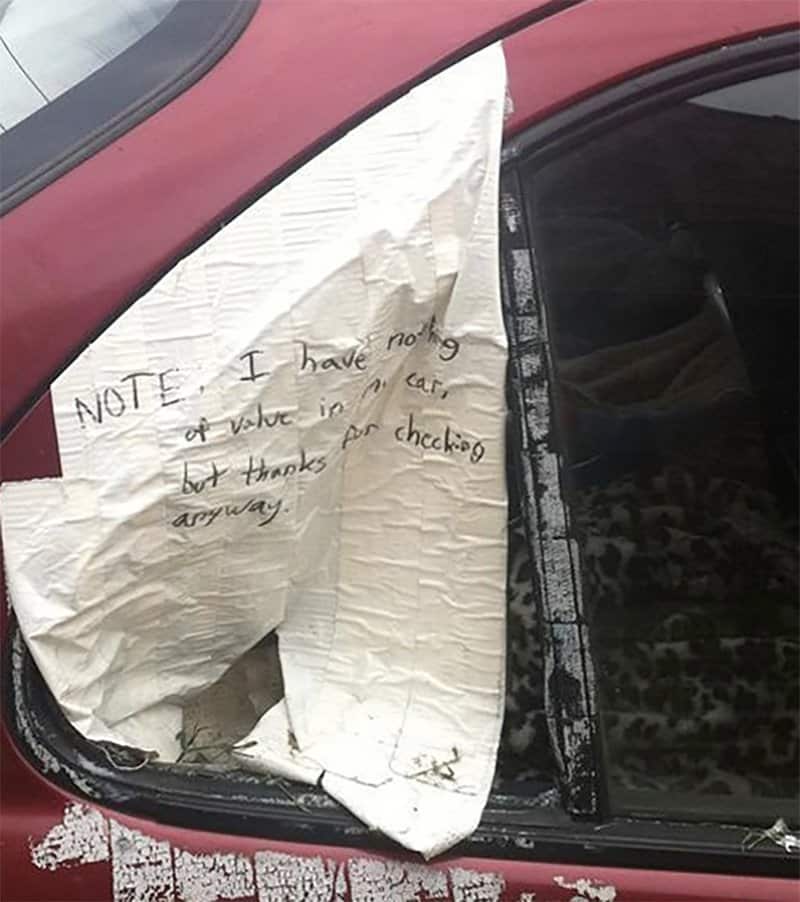 When you’re too poor to afford anything nice and people break into your car anyways, you should probably move out of the hood. 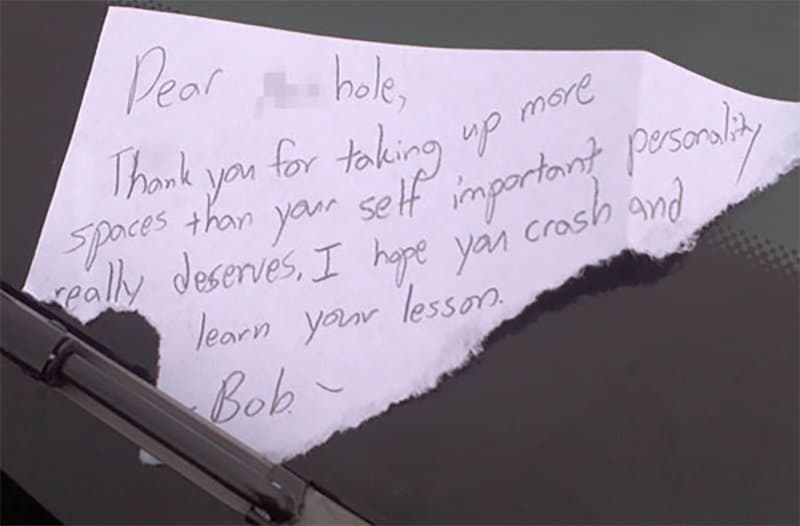 Good old Bob giving no shits and telling it how it is. Sometimes a harsh lesson is the only way to leave a lasting impression on someone. 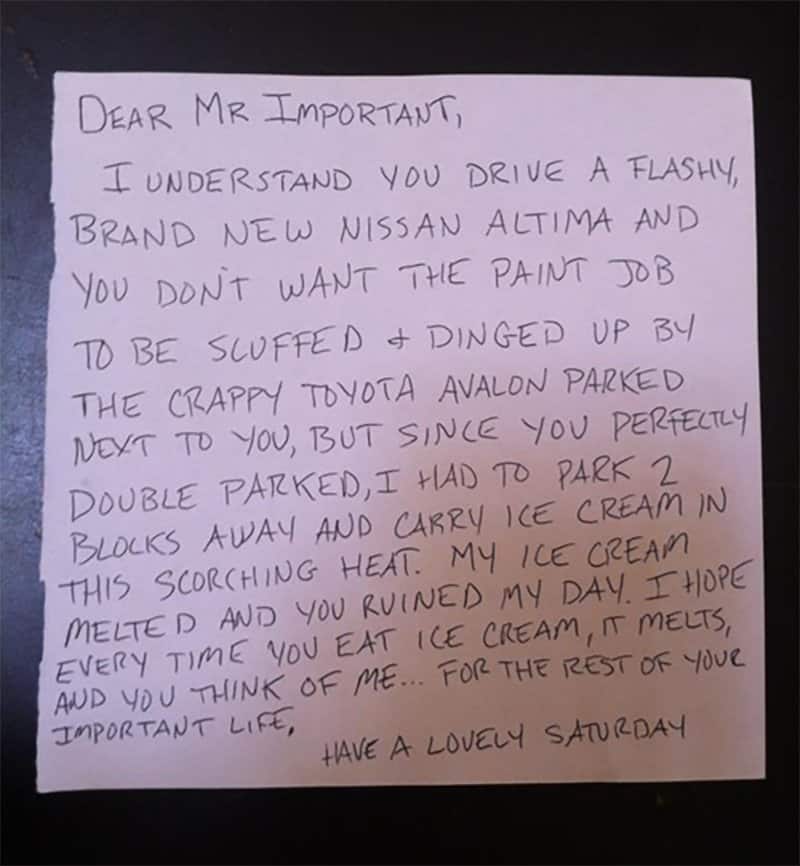 We would not agree that a Nissan Altima is a nice car, but the general consensus is that this guy who parked in two spots is the worst kind of person. Learn how to park or have your ice cream forever karma-melted.